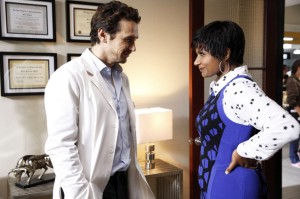 FOX has put the second season premiere of The Mindy Project online more than a week before its television premiere. The episode will be available on Hulu, FOX.com, FOX on Demand, FOX NOW, and various connected devices (e.g. Xbox 360, Roku, Windows 8) and online distributors (e.g. Youtube, iTunes, Amazon) from September 10th through Monday, September 16th at midnight.

Titled “All My Problems Solved Forever,” the episode follows Mindy and Casey to Haiti, wherein she promptly gets ill and has to be airlifted back to New York. Meanwhile, Schulman & Associates welcomes a new OB/GYN who happens to be a sex therapist and offers advice on how Danny and Christina can spice up their love life. Will they find anything valid in what he has to say or are they going to write him off for being inappropriate and thinking he knows their dynamic without knowing them personally?

Putting pilots online early has become something of a norm for broadcast networks in recent years, an easy way to build buzz and get shows sampled without having to spend the extra money on marketing. However, season premieres are more rarely released early, so this is likely FOX being confident in the direction The Mindy Project is taking this season after a shaky first season and wanting word to spread that the show has worked out the kinks that kept it from being the critical darling that many thought it would be.

The second season premiere of The Mindy Project is slated to air Tuesday, September 17th at 9:30 on FOX. You can check out the rest of FOX’s fall premiere dates here.

Will you be watching The Mindy Project this season? Do you think the show can become more steady creatively than it was during season one? Should networks put season premieres online before they air on television?