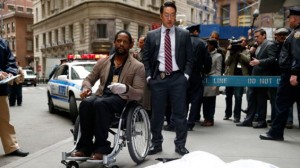 The pilot episodes of Blair Underwood-fronted crime drama Ironside and interracial family comedy Welcome to the Family have officially been released by NBC on Hulu. They’re the first NBC series to have their premieres put online early this season, with Dracula, Sean Saves the World, and The Michael J. Fox Show still under wraps for now.

A remake of the classic 70s series of the same name, Ironside stars Underwood as Detective Robert Ironside, an acerbic policeman with killer instincts and a sterling reputation that has made him one of the faces of his department. Not even a bullet shattering his spine two years ago can stop him from being out on the streets and doing his job to the best of his ability; in fact, it’s made him a tougher, faster, and more ardent detective, as he seeks to bring about the justice that he believes is missing from the world today. The series also stars Brent Sexton (The Killing), Spencer Grammer (Greek), and Pablo Schreiber (Orange is the New Black).

Meanwhile, Welcome to the Family tells the story of teenage couple Junior (Joey Haro) and Molly (Ella Rae Peck) and the pregnancy that brings them together while ripping their families apart. Junior gets a text during his high school valedictorian speech that Molly’s expecting, throwing what they expected their futures to be out the window. The two quickly embrace the idea of becoming young parents, but their own parents aren’t so keen on the idea of promising academic careers being abandoned for morning sickness, colic, and strained finances. However, they soon realize that their kids are bound and determined to be together and start a family, so while the mothers take a kinder approach to get to know one another, the fathers have a more difficult time coming to terms with where their children want their lives to go. The series also stars Mike O’Malley (Glee), Mary McCormack (In Plain Sight), Justina Machado (Six Feet Under), and Ricardo Chavira (Desperate Housewives).

The series premiere of Ironside is set to air Wednesdays, October 2nd at 10:00 on NBC, with the first episode of Welcome to the Family slated to premiere Thursday, October 3rd at 8:30. You can check out the rest of NBC’s fall premiere dates here.

Will you be watching either, both, or neither of Ironside and Welcome to the Family this fall? Do you think that either will end up being a success for NBC? Which pilot do you hope gets released early next?