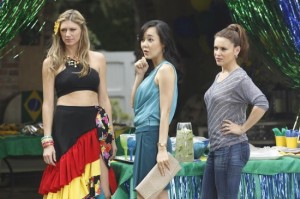 his week on TVHackr, we talked about the end of Magic City, the debut of The White Queen, and the first trailer for Homeland’s third season, while the internet touched on breaking the fourth wall, the infamous Netflix algorithm, and violence on MTV.

Magic City Season 2 Recap: Know Your Local Butcher
While Ike’s ties to Vic are damaged by the Havana deal, Klein vows revenge and Sy arrives in Miami after the bolita disaster.

Maura Tierney Cast in Showtime Drama Pilot The Affair
The Emmy nominee will be playing the wife of Noah (Dominic West), who finds out about him cheating with Alison (Ruth Wilson), a waitress at a pancake house.

2013 TCA Award Winners
Among the winners at the 2013 Television Critics Association awards were Breaking Bad, Game of Thrones, The Big Bang Theory, The Americans, and Parks and Recreation.

Mistresses 1.10 Preview: Richard Confronts Paul Over April
On the next episode of Mistresses, Richard finds out about Paul still being alive, while Joss tries to impress Olivier and Savi faces the idea of her marriage being over.

ABC Announces Midseason Premiere Dates, Split Season Return Dates
To combat viewer erosion, ABC will be airing its serialized dramas in two chunks, with the second half of Scandal, Revenge, and the like set to premiere starting in late February.

Awkward Renewed for Season 4 by MTV
MTV has renewed high school comedy Awkward for a fourth season and installed new showrunners to replace creator Lauren Iungerich, who left the series at the end of the third season.

The Fosters Summer Finale Recap: The Church of the Three Stooges
On the summer finale of The Fosters, Stef’s wedding makes her reflect on the impact her father’s words about her sexuality have had on her mindset, while Callie makes a rash decision after being confronted by Jude.

News Roundup: Downton Abbey to Return Sunday, January 5th
While Downton Abbey will be premiering on PBS this January, Bravo has greenlit a scripted pilot from Marti Noxon (Buffy the Vampire Slayer) and ABC names its next Bachelor.

Bates Motel Adds Paloma Kwiatkowski for Season 2
Bates Motel has added the newcomer as Cody, a small town party girl who befriends Norman and convinces him that acting out to dull his inner pain is a good thing to do.

CBS Greenlights Sci-Fi Drama Extant for Summer 2014
After an intense bidding war between networks, sci-fi drama Extant has landed at CBS with a 13-episode order and a production commitment from Steven Spielberg’s Amblin Television.

Jordana Spiro Joins FX’s Tyrant
The My Boys alum is set to play a cultural attaché and the wife of Justin Kirk’s character on the FX drama pilot, from the producers of Homeland.

Twisted 1.10 Sneak Peeks: Danny Faces an Impending Expulsion Hearing
On the next episode of Twisted, Danny faces the possibility of being expelled, while Rico rushes to stop the spread of the video he was anonymously e-mailed.

Masters of Sex Trailer: The Study of Sex vs. the Study of Science
On the first trailer for Showtime’s upcoming period drama Masters of Sex, sexuality researcher William Masters might have met his match in Virginia Johnson, who initially interviews to be his secretary.

Siberia Spoilers: The Contestants Deal with an Early Winter
Coming up on Siberia, the group gets split into two by the first snow of the competition, while one contestant has to be tied down and another begins to feel their sanity slipping away.

Twisted Summer Finale Spoilers: Tess Becomes Involved in the Investigation
Coming up on Twisted, Tess reveals just how much she’s connected to Tara’s murder, while Danny and Archie have a confrontation at a soccer team party.

Homeland Season 3 Trailer: Where in the World is Nicholas Brody?
Showtime released the first official trailer for the third season of Homeland and in it, everyone is still reeling from Brody’s disappearance and the bombing that killed several key governmental officials.

Magic City Series Finale Recap: You Really Don’t Know Me At All
The gambling bill is decided and the fallout impacts everyone on Magic City, even those who backed the “right” man out of Ike and Ben. Who ended up biting the dust?

The White Queen Series Premiere Recap: Is He Really the King?
Elizabeth meets newly crowned King Edward IV and instantly becomes attracted to him, to the point where she agrees to marry him despite being from two different houses and drawing unwanted attention (and danger) to herself.

The Science Behind the Netflix Algorithms That Decide What You’ll Watch Next (Wired)
Wired interviewed Carlos Gomez-Uribe, VP of product innovation and personalization algorithms, and Xavier Amatriain, engineering director, about what goes into Netflix’s recommendation algorithm.

Violence on MTV: Why Did Producers Stop Intervening on Real World? (Variety)
Variety looks at the increasing freedom that producers of Real World are participants on the show and how violent it has become in comparison to earlier in its lifespan.

The Most Fourth Wall-Breaking Moments in Television History (io9)
Do you like your shows to know that they’re television shows? i09 looks at several different categories of fourth wall-breaking, including fake interviews, people playing themselves, and a TV show within the actual show.

How to Make a TV Drama in the Twitter Age (The New York Times)
The Times talked to several showrunners, including Shonda Rhimes, Carlton Cuse, and Terence Winter, about how social media impacts their writing, how they integrate/address social media within their shows, and how they avoid becoming defensive about criticism.

30 best TV shows to binge-watch (Newsday)
Need a new show to binge? Newsday has some suggestions.