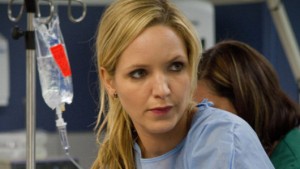 The Mob Doctor’s Jordana Spiro has become the latest addition to FX drama pilot Tyrant, according to The Hollywood Reporter. She’s reportedly set to play Dana Tucker, the wife of Justin Kirk’s John Tucker and a cultural attaché at the American Embassy.

From Homeland‘s Howard Gordon and Gideon Raff, Tyrant follows an unassuming American family who are unknowingly drawn into the inner workings of a Middle Eastern nation. It’s one of two drama pilots currently in contention at the network, along with thriller The Strain from Guillermo del Toro, which is said to be on the cusp of a series order. With FX’s programming needs following their split into two different networks, though, a pickup for The Strain isn’t necessarily a death knell for Tyrant, especially considering the auspices involved in the latter. The pilot, once set to be directed by Ang Lee in his first project following Oscar-winning Life of Pi, will now be helmed by David Yates (Harry Potter and the Deathly Hallows: Part 2) and filmed in Morocco, where production is to begin later this year.

In addition to her role on the DOA FOX medical drama, Spiro has appeared on the likes of My Boys, Dexter, and Harry’s Law. She joins a cast that includes Sibylla Deen (Home and Away) as young bride Nusrat, Mehdi Dehbi (The Other Son) as a man assigned to keep the main character’s son out of trouble, and Moran Atias (The Next Three Days) as the wife of the main character’s older brother. The main characters of the series – married couple Barry and Molly, as well as their children, have yet to be cast.

What do you think about the casting of Spiro as Kirk’s wife? Who else would you like to see join the Tyrant cast before production begins? Should the show be picked up to series by FX, when and where would you air it on the schedule?