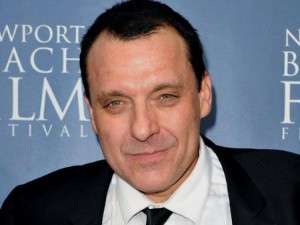 Upcoming Sundance Channel drama The Red Road has added Golden Globe nominee Tom Sizemore to its cast. He’s set to play unpredictable drug dealer Jack Kopus, the father of Phillip Kopus (Jason Momoa), a Native American ex-con who forms an alliance with local cop Harold Jensen (Martin Henderson). The uneasy partnership, built on a recent tragedy and cover-up involving Jensen’s wife Jean (Julianne Nicholson), comes at a time when Harold is being pulled apart by the responsibility of policing two separate communities: the small town where he grew up and the neighboring Ramapo Mountains, home of the Ramapo Mountain Indians.

Will he be able to balance his responsibilities as sheriff with his agreement with Phillip, while also keeping his family from crumbling around him? Or is everything going to prove to be too much for Harold and lead to his inevitable downfall?

Set to debut next year, The Red Road will be the second wholly owned scripted series in Sundance history, with the first (Rectify, starring Aden Young as a man released from prison after 19 years on death row) also returning for its second season in 2014. Like Rectify, the first season of The Red Road, which was picked up straight-to-series, will consist of six episodes. The series will be executive produced by Aaron Guzikowski (Contraband), Sarah Condon (Bored to Death), and Bridget Carpenter (Friday Night Lights), the latter also acting as showrunner. James Gray (The Immigrant) will direct the first episode, though no word on a production timetable has been released as of yet.

Though Sizemore is most known for her film work, including a role in Saving Private Ryan, his television credits include appearances on It’s Always Sunny in Philadelphia, Perception, and Hawaii Five-0, where he played Capt. Vincent Fryer for five episodes.

Does The Red Road sound like something you would watch? Are you excited to have Tom Sizemore on television in a regular role? Who else would you like to see join the cast?