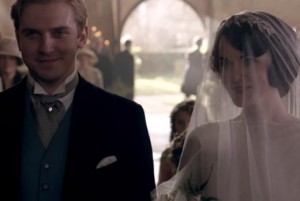 At their TCA session today, PBS announced that critically-lauded period drama Downton Abbey will be returning for its fourth season on Sunday, January 5th, 2014. The series, which set ratings records during season three, will be airing in England several months earlier, as the network uses the buzz from overseas to help promote the show in the United States. PBS also gave spy drama The Bletchley Circle a renewal for a four-episode second season, set to premiere sometime next spring. The first two episodes of the season will air together as “Blood on Their Hands,” while the last two episodes of the season will be known as “Uncustomed Goods.”

-Fresh off its premiere at the Television Critics Association press tour, Marvel’s Agents of SHIELD will be screened during D23 Expo 2013, a Disney fan event designed to give access to Disney films, television, and theme parks. About six weeks ahead of its September 24th television premiere, SHIELD is set to screen on Sunday, August 11th at 3:00 p.m. in the D23 Expo Center. The event itself takes place from August 9th-11th at the Anaheim Convention Center.

-Bravo has greenlit Girlfriends’ Guide to Divorce, about the author of a self-help book navigating her life as a newly single woman in her 40’s in Los Angeles, to pilot. The pilot was written by Marti Noxon (Buffy the Vampire Slayer, Glee) and becomes the second project currently in development at the network, who recently passed on Rita, a drama starring Anna Gunn as a teacher struggling to balance her three children and chaotic job.

-Former soccer player Juan Pablo Galavis has been named the next Bachelor by ABC. His season of looking for love, and someone to introduce to his daughter Camila, will air this January. He was eliminated during the home visits that recent Bachelorette Desiree made this past season.

-Emmy winner Jaime Pressly (My Name is Earl) has joined TVLand pilot Jennifer Falls, which tells the story of a single mother who gets fired from her job and has to move back in with her mother until she gets on her feet. Pressly will play the title character, a woman who goes from a six-figure position to a waitressing job at her brother’s bar. Her most recent series was FOX’s I Hate My Teenage Daughter, where she co-starred along with Katie Finneran.

-After bowing to its strongest premiere numbers in two years, America’s Next Top Model has bumped two new episodes of Perfect Score, as the second half of its season premiere will be rebroadcast this Friday at 8:00; the first half will now be aired the previous day at 9:00, following a Vampire Diaries repeat. An all-new episode of Top Model, where the first cut is made in the group of 16 contestants, is still set to air Friday, August 9th at 9:00 on The CW. There’s no word on when (or if) the two booted Perfect Score episodes will surface.

-Kanye West will perform at the MTV Video Music Awards for the seventh time this year. The rapper joins Lady Gaga on the 2013 VMA lineup, where he’s scheduled to perform “BLKKK SKKKN HEAD” from his most recent album Yeezus. The 2013 VMAs will air live Sunday, August 25th at 9:00 on MTV.

-CBS midseason drama Intelligence has named Barry Schindel (Law and Order) as showrunner and executive producer. The series, which stars the likes of Josh Holloway (Lost) and Marg Helgenberger (CSI), will premiere Monday, February 24th at 10:00. You can check out a trailer here.

-Netflix has picked up 13th-century adventure series Marco Polo from Starz, the latter having ordered the show straight-to-series in January 2012. However, after little movement following said announcement, Starz released the project, from John Fusco (Hidalgo) and showrunner Dave Erickson (Sons of Anarchy). The nine-episode series, originally slated to film in China, will chronicle the famed explorer’s journey during his early years in the court of Kublai Khan.

–Community‘s Donald Glover is set to write, executive produce and play the lead in a half-hour comedy for FX. The series, tentatively titled Atlanta and currently in development, is set against the backdrop of the Atlanta music scene, which Glover grew up in.

-Issa Rae (The Misadventures of Awkward Black Girl) and Larry Wilmore (The Bernie Mac Show) have teamed up for a half-hour comedy currently in development at HBO. The series, starring Rae, is said to focus on the awkward experiences and racy tribulations of a modern day African-American woman.