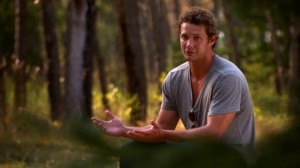 While the contestants of Siberia knew the rules of the show going into their involvement, it didn’t necessarily dawn on them just how alone they would be out in the wilderness. In the back of their minds, they always just assumed that the producers or someone affiliated with the show would intervene should things get too bad, that the emphasis on them being alone in the woods was more of a psychological trick than a factual statement. However, once they discovered the destroyed base camp where the producers stayed, the idea that they were indeed by themselves in the Siberian wilderness with no medical supplies, no food, and no way of reaching the outside world began to sink in. The contestants could either fall apart due to this latest revelation, letting the environment and the circumstances they’re currently facing bring them to the edge of sanity, or they could use this latest setback to pull together and figure out how they can keep Irene alive, squash the differences between them, and go home.

Monday, August 12th – “Out of the Frying Pan”
When Johnny (Johnny Wactor), Joyce (Joyce Giraud), and Daniel (Daniel David Sutton) return with news of the bloody scene left behind at the abandoned producers’ basecamp, Esther (Esther Anderson) is the object of an angry verbal attack by all the others who now fear for their lives alone in the wilderness. Sam (Sam Dobbins) finds and keeps Miljan’s (Miljan Milosevic) century-old Russian diary and reads aloud about a violent tribe of “Valleymen” feared by the original settlers and who still may be stalking the Siberian contestants; and a mysterious radio tower beacon appears in the distance, promising hope of salvation.

Monday, August 19th – “First Snow”
Plunging temperatures and withering hope, push some of the contestants to the edge of sanity, requiring one to be tied down while another’s life hangs in the balance. The group hiking out toward the beacon faces death amid the treacherous cold, while the others search the abandoned and bloody producers’ camp, yielding some desperately needed food and clothing. But the joy is short lived as the reality of an early winter sets in with the contestants now split into two groups each not knowing the fate of the other.

What do you think happened to the producers of Siberia? Will the two groups ever find their way back to one another? Who will ultimately “win” the show and escape with their life?