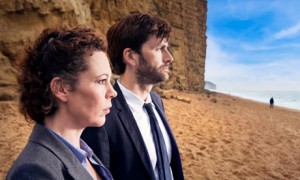 At their TCA session today, FOX made several major announcements related to their event series development, how to catch up on the most recent seasons of their in-season hits, and the next piece of the Gordon Ramsay empire.

The network put an adaptation of UK series Broadchurch, which stars David Tennant and Olivia Colman, on their list of upcoming miniseries, as a series order was given to the crime series. Original series creator Chris Chibnall is set to adapt the story of an unsolved murder shaking a small town to its core for a January 2014 filming and a premiere during the 2014-2015 season. No casting has been revealed as of yet. You can watch the full first episode of the original series below.

24: Live Another Day has added Mary Lynn Rajskub, who will resume her role as CTU systems analyst Chloe on the 12-episode revival of the 2001-2010 FOX series. Having appeared in the second most number of episodes, Rajskub is the also the second cast member named to the production, which will debut in spring 2014. No details have been released about the project, though, aside from the fact that it takes place several years after the events of the final season.

Beginning August 11th, the most recent seasons of Bones, New Girl, Bob’s Burgers, The Mindy Project, Raising Hope, Glee, Family Guy, American Dad, and The Simpsons will be available On Demand through participating cable and telco providers nationwide before they return this fall. Additionally, episodes will be available on FOX.com and through the FOX Now app; they’ll be appearing in bunches of 5-6 every Sunday through September.

For the second year in a row, American Idol will head out on a bus tour to find talent in smaller cities around the country. The tour kicks off August 17th in Little Rock, Arkansas and hits the likes of Knoxville, Tennessee and Chapel Hill, North Carolina along the way; additional cities will be added at a later date. A complete list of dates confirmed thus far and information on the requirements to audition at the bus tour are available on AmericanIdol.com.

FOX has named the 24 contestants for Masterchef Junior, the latest in Gordon Ramsay’s army of cooking competition series. This time, though, all contestants are between the ages of 8 and 13 and have to impress Ramsay, restaurateur Joe Bastianich, and acclaimed chef Graham Elliot in order to be named Masterchef Junior and win $100,000. Premiering September 27th, challenges are set to deal with cupcakes, Beef Wellington, and restaurant takeovers.