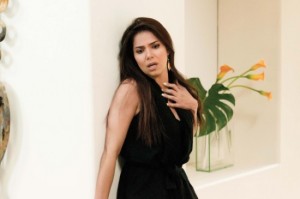 After debuting with underwhelming numbers for its series premiere, Lifetime’s Devious Maids has climbed to series high numbers in two of the past three weeks, nearly doubling its 18-49 rating from premiere to episode six. As such, the network will be running a marathon of the first six episodes in advance of the next new episode; beginning at 3:00 p.m., the antics of Marisol, Zoila, Valentina, Carmen, and Rosie will be put on display once again, as they deal with the murder of a dear friend, the arrest of a close family member, and the desire to use their time as a maid to boost other career endeavors.

Listed below are the times, titles, and descriptions of the episodes in the Devious Maids marathon.

3:00 p.m. – “Pilot”
Four maids try to realize their dreams while working for wealthy families in Beverly Hills. In the opener, the ladies turn to one another for support when a fellow maid is murdered during one of the largest society events of the year. Meanwhile, a newcomer is hired to clean the home of a newlywed couple with a complicated love history and gets caught up investigating the homicide.

4:00 p.m. – “Setting the Table”
Zoila gets irritated when Valentina tries to get closer to Remi; Spence accuses Peri of cheating; Carmen takes advantage of Alejando and Odessa being out of the house; Marisol tries to figure out a way to spend more time at the Powell house.

5:00 p.m. – “Wiping Away the Past”
Michael’s ex-wife reveals a shocking secret about Taylor’s past; Adrian tries to cheer up a recently divorced friend; Valentina and Genevieve attempt to get Remi to see Valentina as more than just a friend; Spence offers to help Rosie out of a bind; Carmen secures a meeting with a major music producer.

6:00 p.m. – “Making Your Bed”
Genevieve’s brother returns and complicates life for Zoila because he once broke her heart. Meanwhile, Rosie vows to help Spence with his marriage; Marisol works a fund-raiser at the Powell house in order to uncover more information on Flora’s murder; and Alejandro allows Carmen to be a guest at the party he is hosting while Odessa works in her place.

7:00 p.m. – “Taking Out the Trash”
A visitor from Carmen’s past shows up at Alejandro’s house; Valentina meets Remi’s new friend; Peri becomes convinced that Spence is having an affair and tries to bribe Rosie into giving her the woman’s name; Evelyn and Adrian celebrate an important birthday.