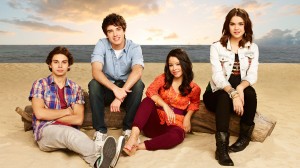 ABC Family is set to air a marathon of The Fosters in advance of its summer finale. Beginning Monday, August 5th and extending from 12:00 p.m. to 7:00 p.m., the well-received family drama will have its second through ninth episodes reair, leading into an all-new Switched at Birth. The series has already been picked up for additional episodes, with the 10-episode second half of its season airing in January alongside Switched, Pretty Little Liars, and Twisted.

Listed below are the times, titles, and descriptions of the episodes that will be played during the Fosters marathon. Sneak peeks are linked on each episode title, while recaps are also included.

12:00 p.m. – “Consequently” (Recap)
Lena and Mike disagree about whether to punish Brandon. Elsewhere, Jesus tries to cover for Mariana and puts his health at risk in the process, while Callie gets blamed for Mariana’s transgression; and Jesus and Lexi embark on a secret relationship.

1:00 p.m. – “Hostile Acts” (Recap)
Mike invites Brandon to move in with him, which leads to an argument between Stef and Brandon. Meanwhile, Mariana objects to Jesus dating Lexi; and Callie’s journal assignment sparks memories of a dark secret from her past.

2:00 p.m. – “Quinceanera” (Recap)
Lena wants Mariana’s quinceañera to be perfect, but Mariana uncovers a secret that may ruin her day. Meanwhile, Lena’s mom visits; and Stef reminds Brandon of the dating rules when she observes his and Talya’s friction over Callie.

3:00 p.m. – “The Morning After” (Recap)
Passion takes Jesus and Lexi by surprise, and soon they realize there may be consequences. Meanwhile, Brandon objects to Callie’s budding romance with Wyatt; Stef and Lena’s friends hit a snag in their relationship; and school bullies target Jude.

5:00 p.m. – “The Fallout” (Recap)
Tension between Jesus and Mariana erupts in a big feud. Meanwhile, Lexi’s parents attempt to keep her away from Jesus; Callie tells Brandon about a difficult memory from her past; and Jude tries to impress a new friend from school.

7:00 p.m. – “Vigil” (Recap)
A loved one lands in the hospital, and the extent of Mariana and Jesus’ lies affect everyone. Meanwhile, Callie opens up to Brandon about her mom’s death and her life as a foster child; and Wyatt warns Callie that she’s growing too close to Brandon.