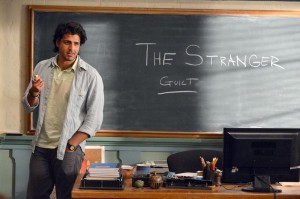 Another morning at the Foster home finds Brandon dealing with a crowded bathroom and little personal space of his own. While he had to deal with a change in his habits when Jesus and Mariana were brought home, the addition of Callie and Jude has really been felt and caused him to become more aware of just how crowded the house is. He runs out of hot water during his shower and later complains to Talya about it at school, though she’s more concerned about her parents not going away again anytime soon and what that means for her time alone with Brandon. He gets an interesting offer, though, that afternoon while spending time with Mike at the batting cages. After Mike hears about how uncomfortably full Lena and Stef’s home is, he suggests that Brandon move in with him until he goes off to college. This would free up some space for the new kids and give them a chance to bond, something that they hadn’t really had since the divorce.

Meanwhile, Jesus is serving a one-week in school suspension due to his confession about the pills, although he makes it out to flirt with Lexi, get yelled at by Lena, and set up plans to meet with the former on the beach at 2:00. Speaking of Lena, she has a meeting with a woman representing the parents of Anchor Beach about Jude, who isn’t up to his current grade level in any subject. Being that Anchor Beach gets its funding through the performance of its students, keeping him around could have adverse effects on their student body as a whole, so unless he manages to pass the proficiency exam that every other student did in order to get into the school, he’ll have to transfer to another location. That’s not feasible right now, not when it would separate him from his only sense of security (Callie), and Lena decides to tutor the boy every day that week to help his performance on the exam that Friday.

Callie gets a writing assignment from Timothy concerning guilt – what was the last thing that she was ashamed of? Made to feel guilty about? He’s merely trying to get them into the habit of writing every day and assures them that no one would be reading it but him; however, Callie’s more concerned about the long-haired boy who she locked eyes with during class. While she tries to write in her room one night, causing a confrontation with Mariana that leads to the truth about why she sold the pills in the first place, Brandon comes home from the cages and breaks the news about Mike’s offer to Lena and Stef. The latter is obviously upset due to Mike not running the idea by her first and becomes even more irate when Brandon informs her that he told me he would think about moving in with him. Stef feels like Brandon doesn’t have a choice in a matter like this and the two get into a big argument, with Stef trying to make him be quiet and Brandon pointing out that he never had a choice in anything – the divorce, his living situation, having two mothers. He leaves for a while and goes to his friend Aiden’s to cool off before returning later that night. He makes up with Stef and she tells him that, after mulling it over with Lena, he does have a choice in where he should live.

The following day at school, Brandon informs Talya that he would be moving in with his father and she’s thrilled at the idea of the two of them being alone together more often. Stef isn’t exactly enthused by being blind-sided by Mike and she lets him know that morning at breakfast, to which he responds that it wasn’t about blind-siding her – it was about doing what was right and trying to soothe the regrets he has about how his relationship with Brandon has went post-divorce. After being sentenced to spend the afternoon with Timothy (and the boy from class, who’s named Wyatt) filling her journal, Callie meets with Brandon and asks whether it was her and Jude that pushed him over the edge and out the Foster’s door. When he goes on about how it was the house he grew up in and refuses to give a straight answer, she inquires again about why he’s leaving.

Jesus makes it out of ISS and runs into Mariana doing something for her drama class. She thanks him for taking the fall for the pills and that act of kindness makes him rethink spending time on the beach with Lexi. Though he’s torn about what to do, he decides not to meet her on the beach and leaves her out there for at least half an hour; when he’s confronted about it by Lexi, Jesus mentions that he doesn’t think it’s a good idea, them getting together, because of Mariana. After school, Callie and Wyatt are in Timothy’s classroom and his encouragement finally triggers something in Callie, as she writes down one word in her journal: Liam. When she gets home, though, she finds quite a bit of inspiration and begins filling the pages with how this Liam fits into the theme of guilt. She leaves to get a snack while Mariana is in the room and later comes back to find that her journal was not in the place she left it. The two have an argument that causes Lena to come running to intervene and Callie spits out that maybe she should get to know her daughter better before mumbling a half-hearted apology and leaving the room.

That evening, Brandon goes over to Mike’s for dinner where his dad is obviously making an effort to reach out. The TV surround sound has been installed, the two get to eat in front of the TV, and he’s already offering suggestions of where Brandon’s instruments could go, should he decide to move in. At the Foster home, Lena continues tutoring Jude, who has been in and out of seven different schools in four years, before suggesting that the family resume their traditional game night. Brandon comes home and interrupts things to tell them that he’s decided to move in with Mike.

He gives Callie the guitar he left for her on her first night home and has Jesus confess to not being the one to give away the pills. The latter says that he fell on the grenade for his sister due to seeing how scared she was when they were both in the kitchen and she was about to say something to Lena and Stef. Being that he’s no stranger to trouble, he figured why not, especially if it would show her how sleazy and untrustworthy their birth mother was. However, Brandon tells him that Mariana’s going to have to stand on her own one day, implying that Jesus can’t keep protecting her and allowing her to evade the consequences of her actions. He gets another shot of reality when he checks the computer and sees that Mariana has been talking to Ana again, showing that she hasn’t learned her lesson after all and he might have took the fall for no reason.

At school, Callie throws her Liam thoughts away and is soon joined by Wyatt, who throws away what he wrote, too. Meanwhile, Jude finished his exam and Lena is the one in charge of grading it. It turns out that he got one too many wrong and she corrects his final problem herself; this gives him the required score necessary to stay in school, but for how long will Lena be able to hide what she did? Also, Lexi stops in front of the ISS window and tries to communicate with Jesus, to no avail. However, just as she thought all hope of them was lost, he bursts into the school bathroom and gives her a passionate kiss, meaning that they’re still on and that he’s tired of doing things for Mariana when she obviously doesn’t respect him enough for what he’s done.

That night, while Mariana assures Callie that she didn’t read her journal, Stef and Brandon have a moment when she joins him in playing basketball. He only ever does that when he’s feeling extremely guilty about something and while the two shoot around, he laments about not getting the family jock genes and she assures him that as long as he does what makes him happy, she’ll be okay with the decision he makes on where to live. Brandon goes over to Mike’s apartment and tearfully tells him that he’s not going to move in after all, that he couldn’t leave Stef just yet. Fortunately, Mike seems okay with it and Brandon goes home to watch a movie with the family.

Additional thoughts and observations:
-Although I consider Lena to be my favorite character thus far, the whole changing Jude’s grade storyline was a bit off to me. If his performance on the exam was so important, why would the school administration allow his foster mother to be the one in charge of grading? Plus, a lot of tests like that aren’t graded like that – they’re filled in on Scantron sheets and sent away to a third-party to be evaluated.
-The other moment that took me out of the episode: the family starting a game of Monopoly at (what was at least) 9:00 at night. Everyone who has ever played Monopoly knows it can take quite a long time to finish, especially with that many people, so it seemed out of character for Lena and especially Stef to okay a bit of late night board gaming.
-I can’t decide if I like how much of a passive aggressive wench Talya is. I get her being upset at Brandon possibly (err, probably) having a thing for Callie, but she’s doing a little much as far as getting her digs in. It’s one thing to defend yourself and to mark your territory around someone who might be interested in your significant other; it’s another to continue to go after somebody who doesn’t have an issue with you.
-Timothy cited a famous Joan Didion quote about writing being an aggressive, hostile act. Here’s an excerpt of the piece that came from and here’s an Amazon link to her memoir about grieving over the death of her husband.
-I guess we’re looking at a Brandon/Callie/Wyatt love triangle developing through the rest of the summer? Which I’m moderately okay with, as long as it doesn’t take over the entire show.
-This is the second week where I thought that Stef was really wrong in how she handled confrontation: the incident with Mike and Lena and now what happened with Brandon, which, while it turned into a great fight to watch, highlighted the fact that I’m not sure if she’s a good parent.
-What are your predictions about Liam’s identity? First love? First heartbreak? Could Callie have gotten him in trouble with the police?
-The best moment of the episode was, bar none, Mike renting the piano for Brandon, thinking he was moving in. It’s good in the immediate, in that it was a sweet, slightly sad way to end the episode, and in the long term, in that Mike isn’t as much of a turd as earlier episodes indicated.
-Next week on The Fosters: Mariana’s quinceanera brings about awkwardness with Callie and trepidation from Stef, while the tension between Talya and Brandon becomes noticeable to everyone around them.