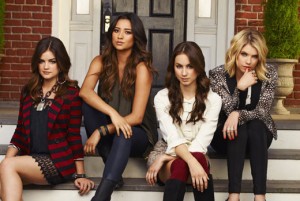 ABC Family has released episode descriptions for the fourth season premiere of Pretty Little Liars and the series premiere of new mystery Twisted, which stars Avan Jogia (Victorious). While the ladies from Rosewood are still reeling from what happened at the lodge, Danny Desai is forced to clear his innocence when his past comes back to haunt him after the death of a classmate. Will Mona have the answers that the liars are so desperately searching for right now? Is there anyone that Danny can lean on at a time when he’s the town pariah?

Pretty Little Liars  – “A is for A-l-i-v-e”
The Liars are desperate to uncover what new scheme “A” has in store for them in the wake of the lodge fire, and have no choice but to turn to Mona for answers, now that she is also being targeted. Aria struggles with seeing Ezra in the wake of their breakup, and Emily starts to make plans for life after high school. Meanwhile, “A” sets Toby on a new path, what’s in the trunk is revealed, and a shocking discovery reverberates through Rosewood.

Twisted – “Pilot”
The premiere episode follows Danny Desai, a charismatic 16-year-old with a troubled past who returns to his hometown after spending five years in juvenile detention. Immediately branded an outcast, Danny attempts to reconnect with his two childhood best friends, Jo and Lacey, and to smooth over tensions with his mother, Karen. When a fellow high-school student is found dead in her home, Danny instantly becomes the prime suspect and the town spirals into a frenzy of suspicion and mystery.

The fourth season of Pretty Little Liars premieres Tuesday, June 11th at 8:00, with the series premiere of Twisted following at 9:00.