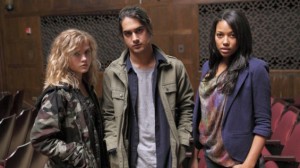 After murdering his aunt when he was only 11-years-old, 16-year-old Danny Desai has finished serving his five-year sentence at juvenile hall and returned to a hometown that wants nothing to do with him. He’s a pariah at the local high school, the subject of hushed whispers and snowballing rumors, while his mother doesn’t know how to begin reconnecting with and trusting her son after so much time apart. Life was never going to be easy for Danny following five years away, but coming up this season on Twisted, he’s going to have a major fight on his hands.

That’s because a body has been found only recently after he was let out and, given his history, people are quick to place the blame on him. With nobody exactly rushing to his defense, aside from the two best friends he’s trying to make up for lost time with, Danny has to do anything he can to clear his name before he’s sent back to juvie for a crime he didn’t commit. Can he manage to keep out of police custody long enough to gather evidence that will exonerate him? Or will he have to rely on people who have had to learn to live without him for quite a while?

The exclusive full episode sneak peek of Twisted airs tonight at 9:00 on ABC Family. The show will officially premiere on Tuesday, June 11th at 9:00 following the fourth season debut of Pretty Little Liars.

Will you be watching Twisted? Is this the type of show that will do best behind Pretty Little Liars? What are you expecting from the upcoming first season?