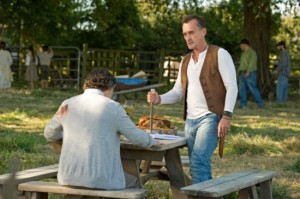 Thus far on Cult, Jeff and Skye have made progress toward figuring out the mystique behind the hit CW show, but they’re not quite there in finding Nate or any answers about Skye’s father. They’ve busted up a dangerous ring of collegiate Cult LARPers and cracked the meaning of “true believers” from earlier in the season, all the while closing in on the reason that Cult fans have gotten so enmeshed in their show’s mythology. But how close can Jeff and Skye get to the show without putting themselves in harm’s way? When will they hit the wall between what they’re feasibly able to do without being caught and what they’re going to have to be creative to find out?

Listed below are the date, title, and description of the next three episodes of Cult.

Friday, March 22nd – “The Kiss”
Jeff (Matt Davis) receives news that one of Nate’s friends might be planning something at an upcoming “Cult” fan costume party, so Jeff and Skye (Jessica Lucas) attend the party dressed as Billy and Kelly. At the party, Skye’s drink is spiked with a hallucinogenic drug similar to a drug used on the television show “Cult.” Sakelik (guest star Aisha Hinds “Weeds,” “Hawthorne”) warns Jeff that he might be in over his head. Also, at the party, Roger (Robert Knepper) meets mysterious stranger named Stuart (guest star Jeffrey Pierce). Meanwhile, on the television show, Kelly (Alona Tal) marries Billy (Robert Knepper) in a flashback scene.

Friday, March 29th – “The Good Fight”
Skye collapses the morning after the “Cult” fan party, suffering a serious reaction to the drug she was slipped. The doctors urge Jeff to locate a sample of the drug so they can find a way to reverse its effects in order to save Skye’s life. Detective Sakelik arrives at the hospital but refuses to help. Jeff suspects that the drug might be hidden at her place so he takes matters into his own hands. Meanwhile, inside Skye’s hallucinogenic state, Billy, Kelly, and Skye’s father Quentin (guest star Obba Babatunde) encourage Skye to give up and stop searching for the truth.

Friday, April 5th – “Suffer the Children”
E.J. (guest star Stacy Farber, “Degrassi: The Next Generation”) slips Jeff  a copy of Sakelik’s police personnel file which reveals that Sakelik was taken into custody by Child Protective Services 25 years ago after being found with other abandoned children at a house in Arrowhead. Jeff and Skye locate the house and question the owner, Annabelle (guest star Brigid Brannagh, “Army Wives”). Sakelik tracks Jeff and Skye to the house and they barely escape with their lives. Stuart (guest star Jeffrey Pierce, “Alcatraz”) continues to befriend Roger. Meanwhile, on the television show, Kelly finds a lock of Meadow’s hair in the trunk of Billy’s car (Valiant).

What will Jeff and Skye find out about Sakelik’s past? Will Skye learn anything about the truth behind Cult in her hallucinogenic state? Is Stuart a danger to Roger?