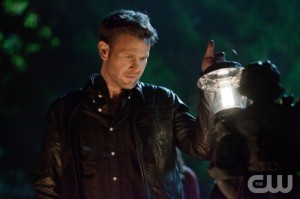 Jeff and Skye won’t get to finish their investigation into the enigma that is Steven Rae, as Cult has officially been pulled from the schedule and unofficially canceled. The ratings-challenged drama had already survived a move from Tuesdays to Fridays, but it won’t be able to air all 13 episodes – at least not yet. There are no immediate plans to air the remaining six installments of the show, which will be replaced by repeats of The Carrie Diaries and Oh Sit! in the coming weeks.

With only a few weeks remaining in the season, it looks like The CW would bite the bullet and air the rest of Cult unimpeded. They didn’t have any fresh material to put in its place and with the summer season about to kick off, they didn’t have the time to launch anything new. However, Cult‘s numbers proved to be too much to ignore, as its last original episode was watched by 620,000 people and noticeably fell from its Nikita lead-in. But what was the downfall of Cult? Was it unclear marketing? A complicated pilot? An incompatible Tuesday lead-in that didn’t allow for sampling? Or the intense Friday competition that led to it facing off with fellow genre show Grimm?

Cult starred Matt Davis as investigative report Jeff Sefton, who begins looking into the popular CW show Cult after his fanatical brother disappears. Once he joins forces with Skye Yarrow (Jessica Lucas), a production assistant on the show, he gradually uncovers a complicated, seedy, dangerous world the show has inspired its followers to create. The show featured Alona Tal as Marti Gerritsen, an actress playing Kelly Collins on Cult, and Robert Knepper as Roger Reeves, an actor playing Billy Grimm on Cult, as well as Aisha Hinds as corrupt Detective Sakelik, whose involvement in the mystery of Nate’s disappearance went even further than Jeff had imagined.

Do you think that The CW made the right decision in pulling Cult? What do you think would have happened in the remaining episodes? Ultimately, what was Stuart planning with the kidnapping of Cult fans?