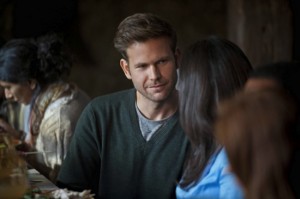 Jeff and Skye have slowly been piecing together what happened to Nate and the real meaning behind Cult. However, they couldn’t continue in their investigation unimpeded, as word of their progress has surely spread throughout the Cult fandom; those who have taken to the show like Nate did now know that there are people hoping to get a look into their world and frankly, this isn’t the type of fanbase that wants attention. They want to continue what they’re doing without having to deal with law enforcement, which means that sooner or later, Jeff and Skye are going to face some serious resistance. Will they be able to handle an increasingly unhinged Sakelik and the darkness lurking in the Cult underworld?

Friday, April 12th – “The Devil You Know”
Jeff (Matt Davis) and Skye (Jessica Lucas) struggle to find evidence against Sakelik (guest star Aisha Hinds, “Weeds”) to use as leverage to gain information on Nate. Stuart invites Roger (Robert Knepper) to a weekend getaway at his Santa Barbara estate. Skye has lunch with her mother (guest star Erica Gimpel) and the two discuss the past. Meanwhile, on the television show, Kelly (Alona Tal) strikes a deal with Billy (Robert Knepper) to get her sister Meadow back.

Friday, April 19th – “Off to See the Wizard”
Jeff and Skye learn about a new initiates meeting of the True Believers. Skye plans to infiltrate the meeting with Jeff following close behind. While Skye and her fellow newbie’s are being driven to the meeting location, Jeff unknowingly follows a decoy vehicle. Meanwhile, on the television show, Kelly suspects that Billy’s followers kidnapped Andy (guest star Christian Michael Cooper).

Friday, April 26th – “The Prophecy of St. Clare”
On the set of the television show “Cult,” Skye consoles Edie MacDonald (guest star Shauna Johannesen), the actress who plays Meadow, after she confesses to being spooked by a pair of figurines she recognizes from her childhood. Jeff and Skye pay a visit to Edie’s mother (guest star Teryl Rothery, “Kyle XY”). Peter (guest star Ben Hollingsworth) continues to spy on Skye. Meanwhile, on the television show, Billy nears his breaking point.

Do you think that Sakelik could be responsible for the decoy vehicle? How close will Jeff and Skye get to Cult before their investigation puts them in danger? Will Skye learn anything from her talk with her mother?