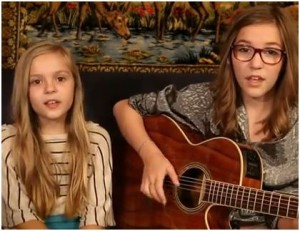 If you read my review of Nashville “I Saw the Light“ this week you already know that one of my favorite parts of the hour was when Maddie and Daphne Conrad (played by real life sisters Lennon and Maisy Stella) sang a cover of The Lumineers “Ho Hey.”

Apparently, I wasn’t the only one who loved the rendition, and the ABCNetwork YouTube Channel already has the clip up under the guise of their ABC Music Lounge (and Nashville of course). As a huge fan of the song before the girls put their signature on it, I’m an even bigger fan now. Not only because they sang it so well, but because the Colorado band The Lumineers saw the wisdom of giving their permission for the song to be used by an 8 and a 14 year old to cover it. Well done, Lumineers!

Check out the video clip:

According to The Hollywood Reporter, the original pilot was filmed with daughters aged 6 and 8, and the Stella sisters didn’t come into the picture until later.

“When Maisy auditioned for us we were completely blown away. Then she told us she had a 13-year-old sister named Lennon and that the two of them often sang together. So we asked them both to come in and audition,” Cutler tells The Hollywood Reporter. “Even though the parts of Rayna and Teddy’s [Eric Close] daughters had been written for a 6- and an 8-year-old, we decided on the spot to change the roles to fit Maisy and Lennon’s ages. Listening to them sing literally brought tears to our eyes. I’m not just saying that. Their voices moved us to tears. We knew we had to cast them — and this was months and months before they decided to post a video to YouTube.”

Their YouTube Channel, LennonandMaisy, is on fire. They frequently put up covers of their favorite songs and I’m going to take a chance right now and say their futures are brighter than most kids flaunting their talents in Nashville right now, even without their acting talents to fall back on. Keep in mind, they’re only 8 and 13 years old. Below is a cover of  “I Won’t Give Up,” by Jason Mraz. If you didn’t think the actors on Nashville sang their own songs, think again. If something was keeping you from watching, are you ready to tune in now?