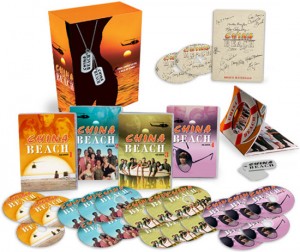 Bear with me, because I’m going to include the ENTIRE PRESS RELEASE from TimeLife about the upcoming DVD release of the 25th Anniversary DVD release of China Beach. Sadly, it’s not going to be cheap. There are many reasons I’m sharing this with you. Firstly, it was one of the best series ever created for television and one of the best about the Vietnam war. The series ran from 1988 to 1991 and started the careers of such stars as Dana Delany (Desperate Housewives, Body of Proof), Marg Helgenberger (CSI), Robert Picardo (Star Trek – Voyager, Stargate SG-1, Stargate Atlantis), and a host of others just too numerous to mention and written by none other than John Wells (The West Wing, Southland, Shameless, ER and Third Watch). This is television canon and history will finally be on DVD.

The real kicker here is just how infrequently China Beach has been seen on television since it first aired and that it has never been released in the U.S. on DVD. Twenty-five years devotees of the incredibly moving drama have anxiously awaited this arrival and it’s coming to you via a boxed set available only from TimeLife. The press release below not only shares what will be on on the DVD sets but what music has been cleared to appear on the set, as well. If you watched China Beach, there isn’t one of you of who hears The Supremes, “Reflections” without thinking back to the show (and, well, crying). It turns out they had to clear 302 songs to get the series to DVD. Talk about a labor of love. I’ve saved you the entire list and provided a link to the cleared songs. You’re welcome.

I don’t expect anything about the set will be disappointing.

To refresh your memory and wet your tear ducts, here’s a video of the opening credits from China Beach.

TimeLife also released a string of videos with with the stars talking a bit about the release and the music, in particular.

Time Life Spent Over a Year Clearing 302 Songs, so that One of the Most Requested Unreleased TV Series (*per TVShowsOnDVD.com) Could Be Released with Nearly All the Unforgettable Music Intact

FAIRFAX, VA, February 26, 2013 – Beginning with the unforgettable title sequence theme song, “Reflections” by Diana Ross & the Supremes, one of the hallmarks of China Beach, the groundbreaking ABC-TV series, was the use of music – iconic, emotional music from the ’60s and ’70s featuring everyone from Bob Dylan and Joan Baez, to Aretha Franklin and Stevie Wonder and dozens of other popular performers. It’s this music, in fact, that has prevented China Beach from being released at all.

“China Beach was long seen by many as unreleasable because of the clearing of so many rights,” said Jeffrey Peisch, VP of Entertainment Marketing for Star Vista Entertainment/Time Life. “However, the show’s fanatical fan base and its standing as one of the greatest TV series to never be released on any format, made us recognize that the time and expense spent on clearing the music was well worth the effort.”

Gord Lacey, founder of TVShowsonDVD.com, said, “When we launched the site in 2001,China Beach was, from the very beginning, one of the most requested unreleased programs on DVD. Fans will be thrilled to know that the music that made the series so memorable will be nearly intact on the DVD set.”

StarVista Entertainment/Time Life spent well over a year clearing the rights to hundreds of copyrights so that the DVD collection would be released with nearly all of the original classic rock and soul music songs from the original broadcasts. The 302 cleared songs featured throughout the series include “Ain’t Nothing Like the Real Thing” by Marvin Gaye and Tammi Terrell, “Nowhere to Run” by Martha and the Vandellas, “Baby, I Need Your Loving” by the Four Tops, “My Girl” by the Temptations, “I Got You (I Feel Good)” by James Brown, Manfred Mann’s “Do Wah Diddy Diddy,” “Brown-Eyed Girl” by Van Morrison, “Piece Of My Heart” by Janis Joplin, Sonny & Cher’s “I Got You Babe,” “Respect” by Aretha Franklin and many more.

For the very first time on any format, CHINA BEACH: THE COMPLETE SERIES is being offered as a 21-disc collector’s set featuring all 62 episodes and over ten hours of exclusive, never-before-seen bonus features including a recent cast reunion, extensive interviews with Dana Delany, Marg Helgenberger, series co-creator and executive producer John Sacret Young and writer/producer John Wells, original featurettes, as well as “Tales from the Five & Dime,” a collectible memory book containing casting notes, rare, archival photos, emotional, heartfelt letters from Vietnam veterans and more. CHINA BEACH: THE COMPLETE SERIES will initially be available exclusively online, available for pre-order at ChinaBeachOnDVD.com for $199.95. For the China Beach aficionados who’ve patiently awaited the release of the series, StarVista.

Following in the footsteps of critically acclaimed and best-selling Time Life DVD sets of THE CAROL BURNETT SHOW and THE SIX MILLION DOLLAR MAN, CHINA BEACH – with its Emmy-winning ensemble, powerful writing and evocative, timeless music – is certain to find a long-awaited DVD home with fans both old and new. Following the exclusive online release, the set will make its retail debut during Q3 2013.

Get it now as a collectors item, or as a gift for someone special: