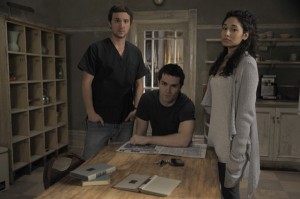 Syfy’s adaptation of Being Human has officially been renewed for a 13-episode fourth season. Set to premiere in early 2014, the season looks to continue the creative rejuvenation began during the third season, which helped the drama become a a top ten cable program in its time period among key demos. Also being given a renewal today was paranormal unscripted series Ghost Mine, set to return for a 12-episode second season this September. Like Being Human, Ghost Mine was a top ten original cable broadcast series in both demos during its time period. Season two will return to Eastern Oregon’s Crescent Mine to continue their quest for gold and evidence of ghosts at the notoriously haunted mine.

The network has also revealed two additional shows that will be appearing on a summer schedule that currently includes Ghost Hunters, Sinbad, Primeval: New World, and Continuum. Premiering Tuesday, July 16th at 9:00, Joe Rogan Questions Everything finds Joe Rogan traveling the country looking for answers to unexplained paranormal mysteries; docuseries Cosworld, meanwhile, debuts Tuesday, August 27th at 10:00 and follows some of the hottest cosplay stars as they make a splash at comic book conventions around the country.

Among the offerings slated to premiere this fall are Fandemonium, a six-episode look at fan boy/fan girl culture and Untitled Jamie Foxx Project, a five-episode, half-hour horror anthology written, directed, and produced by the Oscar winner. Scripted shows in development include No Place, where residents of a high-tech gated community find themselves cut off from the rest of reality; Dominion, taking place 20 years after evil angels descended from heaven to lay waste to the human souls they felt God had favored over them; space opera Orion, which finds a female relic hunter tracking down valuable artifacts in hope of piecing together her past; Sojourn, set to follow the first detective ever in space; Clandestine, where a left-for-dead group of bandits take refuge in a starship floating in space; Infinity, which follows a young billionaire industrialist who leads a ship that falls through a wormhole and ends up lost in the universe; Silver Shields, centering on a farm boy moving to a big city to continue his father’s legacy as a member of the local police force — and to solve the mystery of his father’s death; Shelter, where 30,000 hand-picked humans form a new society underground to protect themselves from a coming meteorite; and Untitled Alfonso Moreno Project, which finds two plane crash survivors sleepwalking, waking up with no memory of their actions, and on the run from the government.

Reality programming in development includes Opposite Worlds, where 20 people from all walks of life are mixed together in two opposing teams that live in two distinctly different worlds; extreme endurance race Unbreakable, which features an altered environment full of obstacles; The Jim Henson Creature Shop, a reality-competition show that will award an apprenticeship with the Creature Shop to one lucky team of amateurs; Meat Loaf Rocks the Paranormal, following rocker Meat Loaf and his family of skeptics and believers; The Gadget Show, focused on previewing and reviewing the latest technological gadgets fit for mass consumers; Dead Famous, set to feature live seances led by a medium; Graveyard Shift, where Josh Gates journeys alongside people whose extreme jobs and bizarre lives start after the sun goes down; and Make Me a Millionaire Inventor, which follows a team of engineers and scientists as they hunt through the U.S. Patent Office for the best inventions — never made — to make inventors’ dreams come true.

Helix, where a team of scientists investigate a possible disease outbreak in an Arctic research facility and find themselves trying to protect the world from annihilation, has already been picked up to series, while Bryan Fuller’s High Moon, which explores what happens when the countries of Earth establish colonies to mine the Moon’s resources and discover a new form of life, is set to begin production on a pilot.