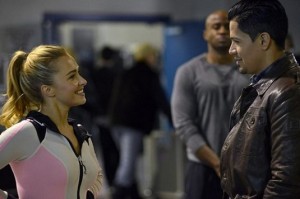 Leave it to Juliette to use Rayna’s father’s heart attack on Nashville as a reason to promote herself at the expense of others. Not only is her mother practically begging for the attention of her sober companion Dante to take notice in her by taking alcohol from the mini bar – but not drinking them – she’s asking him to leave with her so she can not fall off the wagon. Does Juliette care? No. What she does care about is forcing her band to learn 10 new songs before the show that night so she can keep the concert on with herself as the focus of the entire show.

Juliette hasn’t learned a damned thing. I wanted her show to fail, and at the very lest I want it to be the last show Deacon was on with Juliette Barnes. He’s too good to play with a tart like her.

Speaking of learning little, Gunnar is still pushing Scarlett away in his own special way by being, well, an idiot. The two of them go out on the town to celebrate Scarlett’s record deal with Rayna’s company and instead of getting up on stage and singing with her, he’s lets their new roommate Will take the honors. Pushing the hot new roomie into the arms of your girl isn’t the best idea no matter which way you look at it.

Will finally got Gunnar out of his funk by tempting death. It was a very Final Destination stunt – driving his truck right in front of a powering locomotive (Yes, I noticed there were not red and white guards down, how very convenient!). First, Gunnar wanted to kill him and then he realized what happened. “Wanna go again?!” He realized he couldn’t sit and act dead because he brother was gone, because he’s alive. Alive!

While at the hospital, Rayna learns who the musician was that was with her mother, Whitey, and she was a bit shocked. Just as she was ready to tell Tandy, Lamar had another heart attack. I know the man isn’t going to die, and I know Rayna doesn’t need the heartbreak, but if Lamar died it would give her even more room to push Teddy farther away from her except for her beautiful and talented daughters. He’d also lose the help he gets from Lamar, and lord knows he needs it with his past. Maybe he’d get his ass kicked out of politics and take his new re-used Peggy Kenter with him. I’m sure there are plenty of states where the likes of his lies and affairs would be welcome. Is it wrong how happy I was that Tandy got to tell Teddy about Peggy and Lamar and the leak about the divorce to the press? Too bad. I loved it.

I’m pretty proud of Avery as he steps into the Rayna/Juliette tour as a roadie. He happened to also step into a pile of it called Dante when he saw Rayna straddling him on the tour bus. Dante has lost all focus of his sober companionship with the stars in his eyes as being Juliette Barnes new boy toy and manager. I loved how Deacon took him down a peg, told him why he was there and to regain his focus and keep his hands on the roadies until he hears otherwise from the real boss, Juliette herself.

Deacon was never the biggest fan of Avery, but he can also admire someone who’s willing to pull himself up by the bootstraps and get himself back on his feet. It’s not easy to take a tumble from being the next big thing to being a roadie of the big things, but Avery was doing it, without any malice. That’s not something you can overlook. I’d love for Juliette to realize where she remembers Avery from and ask him to join the tour in the place of Deacon, and to tell Dante to hit the road. Or, maybe it would be rude to want Avery subjected to the likes of Juliette Barnes. I’m still shocked at the character turnaround they did for Avery. One minute I was wanting to pound him into the ground and the next I want him to be a huge success.  What’s the likelihood they can do that with Juliette?

It was a pathetic end to the story for Juliette to blame her mother for trying to get the guy, send her back to Nashville and hire her a new female sober companion and keep Dante as her manager. I hope he runs her into the ground. He’s a sober companion. What on earth is she thinking? Where is his knowledge of business and the music industry in particular? I think this will turn out to be a disaster, but should be a fun one to watch.

Deacon and Rayna had a great talk about what it was like to be in her head space after Lamar’s heart attack and learning about her mother’s affair with Whitey. She spent so much time blaming her mother and losing out on years of a good relationship with her father, probably because he wanted to protect her memory of her mother. I kind of makes me look at Lamar with a different light and one I won’t overlook at the season continues. Looking out for your girls can be tougher than it seems, apparently.

Here’s a little clip of the song Chris Carmack (From the OC!) playing Will sang with Scarlett. Actors and singers all, and the jealousy continues.