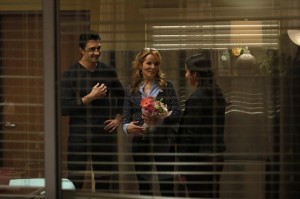 ABC Family has become the latest network to announce its summer lineup, which is set to include two new scripted shows and two new reality shows.

Mondays will feature the series premiere of The Fosters on June 3rd at 9:00, followed by the return of Switched at Birth on June 10th at 8:00. The former makes its debut after the series finale of The Secret Life of an American Teenager and tells the story of a two moms (Teri Polo, Sherri Saum) raising a multi-ethnic family mix of foster and biological children.

On Tuesdays, new mystery Twisted will become the fourth show to be paired with Pretty Little Liars, with The Nine Lives of Chloe King, Jane by Design, and The Lying Game having preceded it. Starring Avan Jogia, it centers on a troubled 16-year-old who returns to his hometown after serving time in juvenile hall for killing his aunt. His peers aren’t exactly convinced of his innocence, though, and when a student turns up dead, he becomes the prime suspect. The fourth season of Pretty Little Liars premieres Tuesday, June 11th at 8:00, while Twisted follows the same night at 9:00.

As with last summer, Wednesdays are a mix of comedy and reality programming. Beginning May 29th, the combination of Melissa & Joey and Baby Daddy will be returning for new seasons at 8:00 and 8:30 respectively. The 9:00 slot will be shared by two reality series, beginning with half-hour comedy clip show Dancing Fools on May 29th. The show will be hosted by Baby Daddy star Melissa Peterman. Wednesday, July 24th sees Dancing Fools make way for docu-soap The Vineyard, which follows a group of 20-somethings spending their summer at Martha’s Vineyard.

Not included in the summer lineup are Bunheads and The Lying Game, both of whom currently have their fates undetermined.