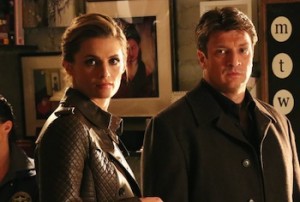 “Do you believe in the power of evil?” Season 5 of Castle has been absolutely on fire and “Scared to Death” was no exception. “Scared to Death” had everything I love about Castle. Witty dialogue, intense case of the week, great character interactions, pop culture references and of course great Caskett moments. Shalisha Francis (the writer of this fantastic episode) I could hug and kiss you. I won’t because that’s creepy.

The case of the week was intense, creepy, and I totally loved it.  I was guessing who the killer was right up until the very end. I had no idea it could be Amanda, Val the first victim’s roommate. The best had to be Castle smashing the holy water over her head. Just the fact that Castle had holy water for 2 years made it even more hilarious.

I just loved that Castle mentioned the amount of stiletto’s Beckett had compared to the victim. I know we always talk about Beckett’s wardrobe and how much clothes she has, so it was funny (to me anyways) to hear Castle say it.

I also loved how Castle totally believed the dvd killed Val and since he watched it he will also die. Castle’s imagination has always been crazy, so you had to know he would believe a dvd would have the power to kill someone. Then you have Beckett who’s the more logical of the two, believed it was just a dvd. No evil powers whatsoever. Then there was Espo, who was in Kate’s camp of the non believers while Ryan was a believer along with Castle.

Some comic relief came at the expense of Castle at the hands of Perlmutter. I love Lanie and wish she could be in every episode, but you know when Perlmutter shows up, you’re in for a few zingers. His line, “Detective Beckett, defective Castle” was pure gold.

Things I absolutely loved: Castle wanting Beckett to outlive him. Beckett joking about using the photo she took of Castle in bed for the murder board. Castle calling Wes Craven and asking how to stop evil spirits. The fact that Castle even has Wes Craven’s phone number is amazing! “Friendly competition my ass.” While Castle was crossing things off his bucket list, he admitted to Kate he broke her vase while playing Wii tennis. I literally laughed out loud when Kate said, “Ya, the one that the wind blew over.” I laughed even harder when Castle dared to correct her pronunciation of vase. I can’t even believe Kate believed that the wind blew over her vase to begin with.

Things that made me go hmmm: Castle rejecting Kate 3 times. First he refused to sleep over at Beckett’s place. Then he didn’t want to go with Beckett to the Brunswick Inn, then he rejected her kiss. It all worked in the episode though. Caskett does have a way of cock blocking themselves, which drives me nuts.

Last but certainly not least, the ending. That ending ranks right up there in my favourite Caskett moments. I could not stop smiling from the moment Kate said “Be with Kate. That’s your number 1? When did you write this?” When Castle responded “Well like 3 years ago.” My heart just totally melted. I loved even more that Castle wasn’t embarrassed by this. My heart really turned into a puddle of goo when Beckett mentioned her trick with ice cubes. A total throw back to S3 E12, when Kate mentioned this trick to Castle in front of Drake’s Magic Shop.

I honestly believe the best thing to ever happen to this show was finally putting Castle and Beckett together. Don’t get me wrong, Castle was amazing before Castle and Beckett got together, but now it’s just that much more special that they’re together and we get to have these incredibly sweet moments between them. When you have incredible writers and actors that ooze so much chemistry like Stana and Nathan, it’s a crime to not put them together.