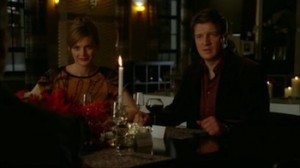 Before I start discussing this week’s episode of Castle, I would like to share my amazing experience at the Castle Fan Charity Convention this past weekend in L.A. with you. This fan event was organized by Castletv.net and California Browncoats. I had such an incredible time hanging out with my friends who are just as passionate about the show as I am. I truly cherish moments like these where I am able to fangirl like crazy over Castle.

This year the guests were Tamala Jones, Penny Johnson Jerald, Armin Shimerman, Rob Bowman, Christopher Brown, Marta Evry, Warren Bowman, Stephen Bowman, Luke Reichle and Chuck Bowman. They were absolutely wonderful. They donated their time to come down and have Q and A’s and autograph and photo sessions with the fans. My respect level for them increased tenfold.

Jason Palmer, who I first discovered at this past years San Diego Comic Con was also at the event. If you’ve never seen his work, I recommend you check out his website: www.jasonpalmer.net He’s such a nice guy and extremely talented. He truly takes into consideration the fans opinions and recommendations for future works.

As I’m sitting here writing this, I still cannot believe I met Tamala Jones and Penny Johnson Jerald. We even participated in a zumba class with Penny and her private instructor. Tamala and Penny are truly phenomenal women. They were absolutely hilarious together during their panel. You sort of forget that their characters have never had a scene together. I’m really happy I got the chance to meet Penny in person. Her character Captain Gates can be quite the hard ass, so her funny side was really welcomed. We even got to hear Tamala sing a little bit. I know we heard her vocal abilities in the episode “The Blue Butterfly”, but in real life she’s fantastic.

I could probably go on forever, but I have to discuss this week’s fantastic episode. I honestly didn’t think I could love Castle anymore than I already do. For the cast and crew to donate their time like this for the fans was incredible. It proves to me that they actually care about the fans. I will do everything in my power to promote this show and I will try to get everybody as obsessed with it as I am.

After Hours was great of course! The meet the parents dinner was super fun and you just knew it wasn’t going to go smoothly at all. Martha and Jim are from totally different ends of the spectrum but one thing is for sure, they love their children. I’m always so super excited whenever we get more Martha screen time. Susan Sullivan is one of my favorites.

The case of the week had a priest getting murdered. I’m sure all my fellow Chucksters squee’d when Bonita Friedericy a.k.a General Beckman came into the precinct as a nun. Ryan was so terrified of the nun, it was hilarious. Esposito was totally making fun of him. The dynamic between Ryan and Esposito is incredible. That’s one of the many things I love about this show. The chemistry between the actors is just amazing. It doesn’t feel forced at all.

Castle and Beckett end up having to protect the witness of the murder because of unforeseen circumstances. There was a bit of tension between the two because of the parents dinner that didn’t go well. I welcomed the tension because everything can’t be perfect all the time between these two. Let’s be honest, even though they were bickering, it was still hot.

Meanwhile, nobody at the precinct could get a hold of Castle and Beckett and panic mode erupted. Esposito contacted Martha and Jim and they high tailed it to the station. The moment Martha and Jim came in together and asked Gates what was going on, I got a little nervous. I don’t know if it was just my imagination but did anyone catch the facial expression Gates made? Was Gates wondering why Martha and Jim were together in the first place? Jim covered it up pretty fast though. Penny said during her panel at Castle Con, she thinks Gates already knows about Castle and Beckett. This isn’t a spoiler or anything, so don’t take this statement literally, it’s just an actors assessment.

This episode really did keep me on my toes. Especially with all the running around Castle, Beckett and Leo the witness did. This show mixes seriousness, comedy and intensity so well. I loved the scene where Martha and Jim bonded over their shared worry for their kids. When Jim told Martha Kate feels the safest when Castle is watching her back, I totally started fangirling. It’s the sweet moments like this that really make an episode for me. Now for that Caskett kiss. I just love the way Castle grabbed Kate and kissed her, trying to reassure her he’ll be okay. You could really sense the worry Kate had. Stana is just so fantastic. Even though they had been bickering almost all episode long they still really love each other and would never let anything happen to one another.

The twist came when we found out the witness was actually the murderer. I honestly did not see that coming. Now Kate was the one in danger while Castle was with the ones that were chasing them. Kate and Castle’s connection has never been stronger. Just by the fact of the encoded message Kate gave to Castle. Castle knew right away something was up. Kate freaking out when Leo shot up the car gave me goosebumps. Her running to Castle and putting her arms while cuffed around his neck whispering ”I thought I lost you” made my heart beat so fast. The ending with Martha and Jim was fantastic. Her slowly touching his face and them laughing and getting along was so adorable. This show continuously hits it out the park, especially this season. For me the line of the night had to be “Living your life for now makes a lot more sense than worrying about the future.”

How will I possibly survive with no new episode next week? I’ll just have to rewatch After Hours.