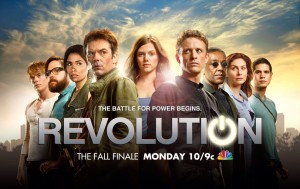 There is a bit of a pun in the headline, so take it with a grain of salt. After all, they did spend a good portion of “Kashmir” walking through sewage, if we’re to believe the Revolution Revealed clip below. I thought it was an old subway line. In the last 15 years, they must have rerouted some sewage there. Whatever. There were a lot of things about Revolution that had me pounding my head against the pillow last night, so I wanted to share. This is the sharing of a video clip wrapped in a bit of a rant, not only about the episode but about the upcoming hiatus and the possible death of la Revolución!

My first thought when Miles saw the dude running into the doorway ahead of them in the tunnel was that there was a trapdoor we just didn’t see. It wasn’t as if they spent a lot of time looking. When the second person hallucinated, I figured – that dastardly (yet extremely handsome) Sebastian Monroe is pumping drugs into that tunnel! After all, wouldn’t he know that’s the only way to get to his place from whence they came? What else have they had to do for 15 years other than direct sewage down there? They might as well pump in some chemicals to drive possibly incumbents batty.

But, no. Despite the flowing water, dripping water and many other indications of openings leading to fresh air, they were suffocating. Not only was the space GIANT, thereby arguing the point that it would have taken much longer to lose the oxygen that had built up over the time the tunnel hadn’t been used, but there was all that water. Still, they were suffocating. Sure. They needed to make it even more threatening than the newly planted bombs that Miles hadn’t mapped out.

Speaking of those bombs. With her handy, what was it, spray paint I think, Nora found and marked all the new bombs. Except when she ‘freed” Charlie, she told everyone to run like hell. Which they did. With absolutely no regard for the ground under their feet. They ran with arms akimbo, eyes to the sky, and then dropped to the ground. Amazingly, hitting none of the freshly painted bombs. Really. Because that happens. All the time. Some people have all the luck.

Just a short distance away was a door, poked with holes. Holes that would have, over the time noted above, allowed plenty of oxygen into the space and made suffocation it the amount of time they were in there impossible. Using silly plot devices to “show their fears” just doesn’t sit well with me. If at all. That’s why I bang my head into a pillow and not a hard wooden object. I’d have a lot of bruises.

When Charlie got shot and, if we’re to believe the scenes of her visiting the afterlife and her father, it took only the voice of Uncle Miles yelling at her in despair to bring her back. Damn. We have been going about this medical care thing all wrong. So much of what we are doing today is wrong. We can wake the dead with an emotional plea, keep our teeth gleaming white without the need of dental care, never get a speck of dirt on our clothing without ever washing them and have lovely, flowing locks of hair sans grease without the need for a shower. Through wishful thinking, perhaps?

The best part of Revolution, featuring the extraordinarily expensive and wasted talent of Led Zeppelin, was Rachel killing Brad when Bas said he didn’t have a need for her any more. “You need me now.” How frakkin awesome is that woman?

In the fall finale, Charlie and Miles finally find Danny, and Charlie will probably have to face the fact her mom has been alive all these years. Miles and Bas have a good old fashion sword fight, leading to the obligatory promise that if Miles returns to the militia his family will be unharmed and Monroe will have the super secret decoder device allowing him to fly helicopters. I still don’t know what that’s going to get him or how he’ll rule the world with a device that allows him to fly a bit here and there, but I’ll tune in to find out.

No matter what happens next week, we’re in some trouble here. Remember series like The Event, Jericho, and Flash Forward? They started out like gangbusters and when they took several months off, the people didn’t come back. While NBC is betting that their lead in The Voice will be the trump card for Revolution, the two are hardly a match made in heaven. I’ve never watched one episode of The Voice and never will. If something else comes along to take my mind off of Revolution, I’m not personally invested enough (save for what they do next week) to feel down if I stop watching four months from now.

What about you? Are you 100% on board? Will absence make the heart grow fonder or will it be out of sight, out of mind for Revolution?

And a preview for the Fall Finale: 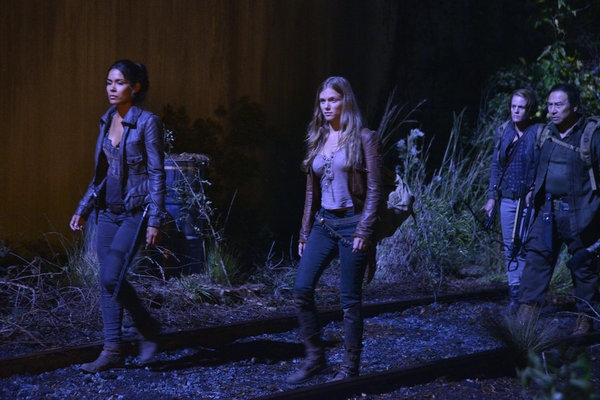