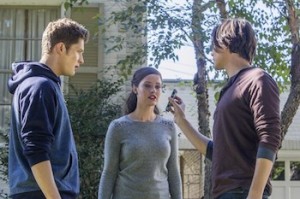 Ravenswood you get me every single time. I’d like to thank the writer of Tuesday’s episode, Sean Reycraft. You totally creeped the heck out of me, and I loved it! It was one heck of an episode.

Let’s get things started, shall we? To recap, there was a secret pact to help protect the soldiers from Ravenswood and keep them alive. The catch – 5 teens had to die per war, for every war and now Caleb, Olivia, Luke, Remy are the marked ones. The curse already got Miranda.

“Home is Where the Heart is” started off with Raymond at Olivia and Luke’s house in the middle of the night. Why is this guy always there? What is going on with Raymond and Rochelle? Then we had Remy drawing everything she saw from when the pact was being signed. You thought that was creepy? Remy woke up to find her room filled with those drawings and the words, “We Will Die” and “You will wish you were dead” written on them. Ok, I’m officially freaked out. Actually, scratch that. I was more freaked out when Remy went downstairs to discover the drawings were all over the kitchen too. Remy remembered drawing some of them, but she must have continued drawing in her sleep. Sleep drawing? Is that a thing?

Caleb’s dad showed up to his place. Caleb’s dad had business in Ravenswood. You remember Henry Rivers, the man that passed away last episode? It turned out Caleb and his dad were his next of kin. Interesting.

After a little family reunion, Caleb went running over to Luke and Olivia’s house after Luke texted him about the cops being at their house. Caleb recognized Springer, the guy who used to work for Collins in the crowd of people that were watching the police take Rochelle to the police station for questioning. The police ended up taking Luke as well as he flew off the handle because his mother got hit in the head while she was being put in the squad car. While Luke was cooling down in a jail cell, a bizarre thing happened. (I do realize I said bizarre, since pretty much everything on this show is bizarre) The man in the cell beside him all of a sudden got up and told Luke, “You should not have seen. If thine eye offend thee pluck it out. You’re going to wish you were dead before this is over. And then, you’ll get your wish.” No joke, I got goosebumps.

Raymond Collins showed up to the Matheson’s house after Rochelle had called him to ask him to check up on Olivia. Olivia told Raymond the police found a knife and that she believed someone planted it. As much as I think Raymond is creepy, I don’t believe he’s up to no good. Side note: how many times now has Raymond just showed up to Olivia’s house?

Another day, another attack by a spirit. Miranda came face to face with Beatrice Meredith Stevens. Miranda went to Remy for help finding out what happened to Beatrice. Beatrice was Grunwald’s sister. Could she have been marked like them and wants this curse broken as much as the group does? Is Collins keeping Beatrice there?

Miranda tried to reach out to Beatrice and it worked. Well, sort of worked. Beatrice showed herself and said to Miranda “Don’t look at that.” Was she talking about that photo of Beatrice and the baby? Wait a minute. Beatrice wasn’t Grunwald’s sister. Miranda figured out that Grunwald was in fact Beatrice’s daughter! Beatrice was a teenager and got pregnant. Beatrice died at 17 with 4 others. Miranda tried talking to her about the pact but Beatrice told her to stop asking. Miranda pleaded with her but Beatrice wasn’t having any of it. I don’t think B wants the curse to be broken because she wants to be with her daughter. Unfortunately, Carla will die and leave Beatrice all alone. Is that what she really wants?

Back to Caleb and his dad. He told Jamie that he broke up with Hanna. Jamie was trying to convince Caleb to go back to Rosewood to try and get back with Hanna but Caleb wasn’t having any of it. Caleb told his dad he wasn’t going to leave Ravenswood. Jamie wasn’t leaving either as he inherited a house from Henry, seeing as Jamie and Caleb were Henry’s only living relatives. I didn’t like that Caleb was acting like a spoiled jerk, but he felt like he had to do it to protect his father. I was really happy Caleb went by to see his dad later on and extended an olive branch. Creepy thing #45 (not really counting, but I totally should be) happened. A bird came in the house and Jamie said the bird was too late. Caleb was confused and Jamie said,  “A bird in the house means a death in the family.” I really hope it meant Henry.

Interesting thing happened. Springer went to Tess asking her what was going on? So, are Springer, Dillion, and Tess working together? I have no idea what’s going on.

Later, Luke went over to see Remy and saw all of her drawings. Later on that evening Remy recited “If thine eye offend thee, pluck it out” and tried to stab Luke as he slept on the couch. Girl gone crazy! She had been sleepwalking and ended up slashing her father by accident. That incident was the last straw and Remy was headed to the sleep clinic. Remy needs some help, but I don’t think that the sleep clinic is going to be very helpful.

Carla and Raymond’s conversation at the end was really insightful. Raymond told Grunwald he saw Springer and the poor guy was drowning and had no idea what he got himself into. Raymond believes Springer is going to do something stupid. Something someone will have to clean up. What is happening? So is Raymond a baddy? I can’t make up my mind about him. One person who has made up her mind about him was Olivia. She told her mother she had to stay away from Raymond. I have a feeling Rochelle is not going to listen to her daughter.

Looked like Springer was going off the deep end. Springer followed Olivia and was telling her all about Dillon. He was telling Olivia that he knows all sorts of stuff about Dillon and that all of this was her dad’s fault and if he would have done right by Springer’s dad everything would have been okay. I was happy Olivia kneed him, but I kind of wish she didn’t because I really wanted to know what he was going to say. Things didn’t work out too well for Springer because he ended up getting hit by a car. A car being driven by Tess! Was this all part of the plan?  I need to know!

By the looks of that last scene, has Miranda figured out something about the curse? I can’t wait another week!

What did you guys think of the episode? Are your heads spinning as much as mine is? Sound off below!