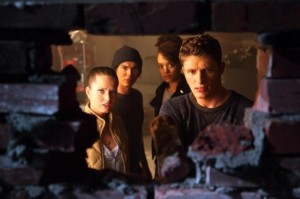 The midseason finale of Ravenswood left the group with more questions than answers, because while they learned about Thomas and Esther and the possibility that Current Caleb and Current Miranda are Original Caleb and Original Miranda, there was the matter of whatever Max is and whoever Max and Dillon report to. There’s a greater evil still lurking around Ravenswood and it seems as if Caleb, Luke, Remy, Olivia, and Miranda have only begun to scratch the surface on finding out what’s behind it and just how deep the town curse really runs.

Whatever progress they may make toward finding out the extent of the threat that they’ll be looking to extinguish will be negated by having Dillon in their lives, seeing as how he’s actively working against them and with some as-yet-unseen force looking to kill off the group and fulfill the curse. As long as Olivia keeps him in her life and gets close enough to him to fill him in on the curse, they’re never going to get as far as they need to, but Dillon knows how to keep himself well-hidden from suspicion, enough to where it might take a while before the group suspects that he’s someone that cannot be trusted.

There’s also the matter of the dynamic change that comes from Caleb becoming convinced that he and Miranda are meant to be, that somehow that could help break the curse. No matter how he reacted in the basement of the S&L to the idea of there being greater forces at work, it has to have stuck with him, especially after the near death experience that showed him what a life with Miranda would be like. For now, the group has been able to steady itself thanks to Caleb’s persistence and hunger for answers, but if his mind is otherwise preoccupied, does it mean that the foursome are as vulnerable as they’ve ever been?

Ravenswood returns Tuesday, January 7th at 9:00 on ABC Family, where it will follow the season premiere of Pretty Little Liars.

Who do you think Dillon and Max are working for? Is Caleb correct in the assumption that he and Miranda are meant to be? Will going through what they went through together bond Remy and Luke?