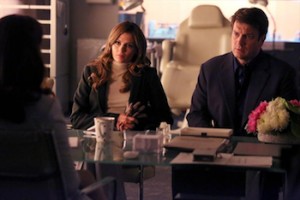 I have never been so unnerved from an episode of Castle before. Monday night’s episode was serious, intense, majorly creepy and I totally loved it. I have to give major props to the writer of Monday’s episode, David Amann and the whole cast and crew. Case heavy episodes aren’t really a favourite of mine, but “Disciple” was on a whole other level. I’m going to say it’s probably one of my favourite episodes of Castle ever. It’s incredible, that in it’s 6th season, Castle continues to amaze me.

“Disciple” started off like any other episode. Security guard found our victim, Pam Hodges hanging from a beam on the docks. Pretty typical right? Well, things went from typical to freaky real fast. Pam Hodges looked exactly like Lanie! Pam had cheek implants to look like Lanie and she even had the same tattoo in the exact same place as Lanie. What was going on?

Before I get into the case, let me just say, Caskett moments are always a must for me. So I loved the scene at the beginning with Castle and Beckett having the honeymoon talk. Some light heartedness before things got really intense. It was hilarious that every place Kate named, Castle had already been there with one of his ex wives. Albania and Finland were the only places Castle has never been to. I do hear they are quite lovely.

Tamala Jones has always been great, but this episode finally gave her an opportunity to showcase her amazing talents. Lanie has always been a favorite character of mine so any time we get to see Lanie in the limelight, I’m really happy. When Lanie was telling Esposito about her night out in the club you really sensed how scared she was. I would be freaking out if my doppelgänger was murdered. The scary factor increased when Ryan and Esposito found victim #2 Daniel Santos murdered on the boat. Just when you thought it was scary that Lanie had a clone, Daniel Santos looked exactly like Esposito! We found out Daniel was even seeing a speech therapist to try and sound like Esposito. It was clear to me at this point someone was targeting Lanie and Esposito.

From the minute we met Doctor Kelly Nieman, I knew she was up to no good. The good doctor was having a relationship with Daniel Santos. I got such a creepy vibe from her, especially after she told Beckett she could make atoledo her perfect. Kelly Nieman might not have been the killer, but there was no way she was innocent in all this.

Someone who definitely wasn’t innocent, was Carl Matthews. You remember Carl Matthews right? He was the security guard at the docks that found Pam’s dead body. He was the one that murdered Pam and Daniel. The more Castle went on about his theory about Carl working with somebody, the more I got scared. I knew it was just a matter of time before Castle mentioned Jerry Tyson, 3XK. I never really believed Tyson died in the water and that he was still out there, waiting to exact revenge on Castle.

Then poof! All the 3XK files were gone. Esposito’s clone, Daniel signed them all out. Even all the files at the M.E.’s office were checked out by “Lanie.” The look on Kate’s face made me so nervous. I have never been this nervous by an episode before. Everything was starting to make sense now. Tyson not only wanted to disappear, but he also wanted his murders to disappear.

Could it have been that easy that they found Carl Matthews at the same motel and room that the police had set Jerry Tyson at all those years ago?

Carl Matthews confessing to the murders was way too easy. I don’t think I’ve ever seen it that simple on any crime show. All of it was way too simple. Carl admired Jerry Tyson’s work but said he was his own man. All of this had to be a part of Jerry Tyson’s plan and just as I suspected, Kelly Nieman was no innocent in this. Turns out, not only was she Tyson”s physician in prison, she was also his girlfriend. Tyson taught her everything he knew.

Unfortunately, by the time Castle, Beckett, Espo, and Ryan got to Nieman’s office, she was gone and I mean gone. What was once a thriving medical practice was now an empty office, with just one thing left behind. An ominous note saying, “Better luck next time” and a pen. That same pen that Kelly wanted to give Castle earlier in the episode. That pen wasn’t just a normal pen. It was a usb drive. I really didn’t know what to think when Castle inserted the drive into his laptop but what came next I never expected. “We’ll Meet Again” by Vera Lynn played and the looks on Kate and Rick’s faces made me even more terrified. “Disciple” made me so on edge. I really don’t know what to think after this episode.

A part of me believed Jerry Tyson had survived that fall into the water and now after this episode I’m in Castle’s camp. I think Tyson is still alive. But could it also be possible that Jerry is really dead and Kelly Nieman did all of that to keep his memory alive? All I know, is that I’m scared for what’s to come. Any of you guys have any theories about that ending? Was the look of fear on Kate’s face just about the song or was there something else going on? Did that song mean something more to her? Could it have something to do with her mother? Or was she starting to believe that Tyson could be alive? Am I correct to say Tyson has now gone after every member of the team except Beckett? Is she next? I can’t shake this feeling that something horrible is going to happen to Beckett on her and Castle’s wedding day.

What did you guys think of “Disciple?” Were you as freaked out as I was? At what point did you think 3XK was behind all of this? Never in my wildest dreams did I ever think I’d be that creeped out by a Vera Lynn song. I have never had so many questions after an episode before. We’re just going to have to wait to see if we will meet Jerry Tyson again. I don’t know when, but I know it’s coming.