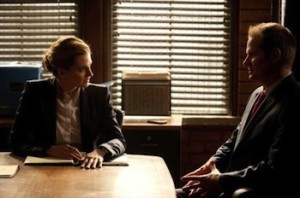 Kate Beckett is the most remarkable character on television. Bold statement yes, but I speak the truth. Stana Katic is just on a whole other level. It completely baffles me that Stana hasn’t been nominated for an Emmy. Her facial expressions alone deserve an Emmy. In “Recoil” we saw just how strong and vulnerable Kate Beckett can be and how truly deep her relationship with Castle is. I don’t need lovey dovey Caskett moments all the time to know that. The subtle way she rubbed his arm and the way they looked at each other just warmed my heart.

“Recoil” featured the return of Senator Bracken, the man responsible for Johanna Beckett’s murder. The Senator was the target for a murder plot. I honestly had no sympathy for this man. A part of me actually wanted him to die. Does that make me a bad person? When Kate said, “Now I’m protecting the man that murdered my mother” my heart broke. I couldn’t even imagine how I would deal with this situation.

I was happy with the many Captain Gates sightings this episode. I have to admit, I wasn’t really a huge fan of Captain Gates when she first came on the scene, but ever since I met Penny Johnson Jerald at Castle Con I’ve had a much bigger appreciation for her character. When she said to Senator Bracken, “Is there a reason you don’t want to work with Detective Beckett?” I actually yelled out to my television, “Can I answer that?!” There is a reason I watch Castle alone. I get a “little” bit too into it.

I cannot even begin to express how intense that Beckett and Bracken “In my dreams I get to pull the trigger” scene was. Stana is just extraordinary. I actually got goosebumps. Beckett was so conflicted this whole episode. You know she wanted to kill this man that destroyed her life, but on the other hand she’s a professional and it was her job to protect this man from being killed. When Kate found the threatening letter that matched the notebook and didn’t show Castle I totally freaked out. How could she not show him? I did love the return of Kate’s therapist. I was happy she told him, but a part of me wished she had told Castle first. Kate almost crossed the line when she attempted to destroy the evidence. I believe there was no coming back from that. I was so happy when she didn’t go through with lighting the letter on fire.

When Beckett saw Robert McManus the suspect and man responsible for the threatening letter to Bracken and let him get away I was in shock. The way she looked at him, I knew a part of her wanted him to get away. The look Castle gave her after she got off 2 shots after McManus already got away was intense. I just hate when Kate feels like she needs to keep things from Castle. I was so happy when she finally came clean to Castle about the letter. Not only are they together romantically but they’re partners and they shouldn’t be keeping secrets from each other.

I actually felt a little bad for McManus. Robert’s son worked for Bracken and committed suicide, which Robert blames Bracken for. Maybe it’s because I hate Bracken so much. The interrogation scene with Beckett and McManus was great. I love when Beckett is in the interrogation room with a suspect. She’s just so methodical. When Gates came to observe, a wave of intensity came over me. I was so pissed when Gates interrupted. I knew something was up when she announced that the Feds found the bomb linked to McManus. The bomb was just too expertly made declared Beckett, which I totally agreed with. I wish I could have gone in my tv and punched out Bracken. He was just so smug. Beckett was way too smart for that. She knew something wasn’t right. I love Beckett when she’s like that.

Who’s heart also stopped from that explosion? I screamed out, “Holy Shit” so loud I probably woke up my neighbours. Castle literally took down Bracken’s driver who was the real culprit in wanting Bracken dead. Obviously he was being paid to do it and almost got away with it if it hadn’t been for Beckett.

I’m still in awe of “Recoil” a day later. It was such a powerful episode. I’ve been impressed with this whole season. I’ve said it once, but I’ll say it again. This season is just so amazing. Castle is on fire and getting better after each episode. It’s scary because this show was great to begin with. I’m actually really happy I didn’t watch any sneak peeks for “Recoil”. This is the second time I’ve skipped the sneak peeks and I’ve definitely enjoyed the episodes more. I will not be watching any sneaks yet again, and this time I’m also not eating sweets this entire week with my fellow obsessed Castle friend. Wish us luck!