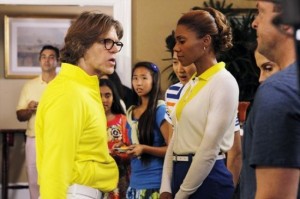 Thus far on The Neighbors, Jackie and Larry have slowly been learning how life on Earth works, with lessons on everything from racial identity and the finality of death to Halloween traditions and extracurricular activities being covered. On the next episode of the intergalactic ABC comedy, they’ll be exposed to what people on Earth deem to be physically attractive and the results might surprise them.

On their home planet, Larry was considered to be the beautiful one in their marriage, but here on Earth, Jackie’s the more conventionally attractive of the two and neither of them knew about this until going grocery shopping with Debbie Weaver one morning. As a result of this startling information, the dynamic of their marriage has been shaken up, so the two decide to spend the evening apart, trying to come to terms with where they are now.

Jackie and Debbie head out to a new local club named Hell for a night away from being wives and mothers; Debbie had been fearing that she lost her looks, so the opportunity to get dressed up, go dancing, and (hopefully) get compliments from men could result in her confidence being restored. Plus, Jackie has never had a chance to walk into a room thinking she’s beautiful and this might be a good thing for her to experience, to step out from the shadows and learn how to be more self-assured. Meanwhile, Marty and Larry are both down in the dumps about their appearances – until they get Amber to help them with their appearances. Can she give them a boost in self-esteem and make them feel like they deserve to be with their wives?

What do you think Jackie and Larry will learn on their outings with Debbie and Marty? How will Marty and Larry look after their makeovers from Amber? Will Debbie find what she’s looking for at the club with Jackie?