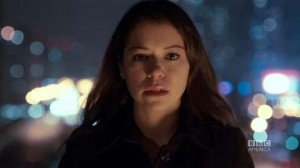 What if you had to witness your own suicide?

Orphan Black‘s Sarah (Tatiana Maslany) did just that when a woman named Beth who looks just like her killed herself; the outsider decides to assume the woman’s identity, but she didn’t just gain a handsome boyfriend and decent bank account. Sarah has been thrust into the middle of a mystery she didn’t even know existed – she and the dead woman are clones, but are they the only ones? Where are the others? How many others are there?

Sarah now has the opportunity to find out who she is and uncover the conspiracy around the cloning. However, there are people who don’t want her to be clued in on what’s been going on, so for as much as she wants to barrel through town demanding answers, she’ll have to slink through the night avoiding detection. Fortunately for her, she has people to turn to in order to help her find answers and figure out her true identity; are all of them necessarily trustworthy, though? And for the matter, is Sarah sure that she’s not being monitored by whoever created her? If she is, it might not matter who she has in her corner or how stealth an investigation she runs into the cloning; it’ll be only a matter of time before she’s caught and disposed of.

Will you watch Orphan Black this season? Did the trailer make you more apt to give the show a try? How many clones are there in the world and will Sarah be able to find out why they’re out there?