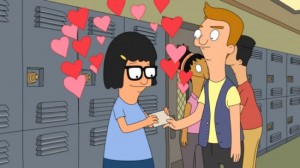 It’s a rainy Valentine’s Day and Bob has gotten Linda the same last minute gift that he always does; he’s made something into a heart-shape. This year, it’s flapjacks, while other years have found heart-shaped burgers, imprints on the bathroom mirror, and dirty laundry intended for the Belcher matriarch. Although she appreciates the gesture, she’s a little tired of never being surprised and Bob never putting any thought into what he got her. While he takes the kids to school, they talk him into taking them to the mall to help them pick out the perfect present for Linda, which they say is a certain porcelain figurine that they’ll know when they see. He reluctantly agrees and they head off to the mall.

Only Tina, Gene, and Louise didn’t know what Linda would want. They convinced Bob that they did to get out of school (and the embarrassment of getting another “from” Valentine from Jimmy Jr., in Tina’s case), so Bob is still stuck on what to do. The figurines are too expensive and since he doesn’t know if Linda would even like them, he passes. He gets to looking at cellphone cases in a fit of desperation, brought back to reality when the kids call him on not being romantic and ask him about the most romantic thing he ever did for Linda. On their first Valentine’s, they were going to have a picnic…until their car broke down. While it was being repaired, they went across the street to a bar and had a fun time, culminating in them testing their love on Dr. Love’s Love Testometer, a machine with a lever to press that told them that their love was “Red Hot.” It was then, Bob says, that he knew he loved her.

They drive to the bar and find out that the machine had been sold a few years ago and only Hugo, who had been inspecting the bar, knows where it is. As he won’t give up the location of the machine, Bob tails Hugo’s van; there are 97 different bars and restaurants in his jurisdiction and there’s no way Bob could find the machine by randomly looking. They finally catch up to the van and Ron interrupts Gene attempting to break in with a rock. He feels bad that Hugo won’t help and gives Bob the carbon copy of their route that day, leading them to the Drink Dynasty Lounge, where the machine is. Bob offers to buy it, only to find out that Hugo had found out about what Ron did and had already bought the machine before he got there.

Bob begs for Hugo to sell him the machine and he does…at 5x what he paid for it. The kids notice that there are initials carved on the machine – BB + BB. Bob had mistaken the unexpectedly perfect day as being with Linda when it was really with Barbara Bunkley, the girlfriend he had about a year before he met Linda. Hugo won’t take back the machine, but when Bob gets home, Linda expresses her appreciation for how hard he tried to make the day special. The day ends up being pretty special for Tina, who gets her homework delivered to her by Jimmy Jr., who also came baring a Valentine.

This year, Tina got a “Heart, Jimmy Jr.” rather than “From, Jimmy Jr.”

The Worst Thing About You
Linda is complaining to Teddy and Mort about her rotten Valentine’s Day when she has an idea. As the two of them are alone, she can help fix them up and find a little fun during her day, so she decides to put on an afternoon of speed dating at the restaurant. There are only six people who show up, including Teddy and Mort, and Linda keeps a pretty firm hold on the happenings, giving them only one minute together and critiquing their hand holding during a round of speed hand holding.

Everything changes when divorced Sgt. Bosco comes into the restaurant in search of a suspect in a jewelry store robbery. He agrees to stay for speed dating, where Linda attempts to have everyone call out their favorite food and favorite sexual position. He puts a halt to that and makes them all tell their dirty laundry – if they can find someone to stomach the bad things, they might just be worth keeping around, in his mind. Information about 10 year yeast infections, throwing mail down a storm drain, and stalking Mark Harmon gets exchanged; the more that they deviate from her original plan and the more that Bosco takes over, the more upset Linda gets, culminating in her taking his gun in an attempt to get back the power in the room.

Only that’s a crime and Linda gets arrested. As she’s being led out, Bob meets her and tells her about his day. The two make up, but before Linda can be taken downtown, a call comes over the radio about a sighting of the robbery suspect. Bosco leaves (not knowing that the call is false and Louise was the one responsible), freeing Linda in the process, while Teddy gets the number of Gina, the woman with the prolonged yeast infection.