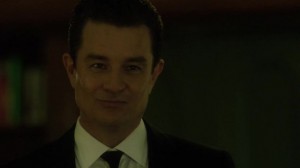 Frederick was sent to East End in order to weaken Joanna’s powers and find a suitable host body for the king as he prepared to confront his family for the first time since they betrayed him. However, once Freddie made it to town and found the warm embrace of his mother, aunt, and sisters, his determination to produce results was tested; what animosity he had for them for leaving him behind was replaced with a sense of relief at seeing those he loves and at the positive reception he received when his existence in East End was revealed. That’s not good enough for the king, though, and now not only does Frederick have to deal with his grandfather’s spirit exerting its impact on him, he’s got wildcard Tarkoff breathing down his neck.

On the next episode of Witches of East End, Tarkoff puts more pressure on Frederick to produce the results he promised were possible. Although Freddie secured himself some time by reminding Tarkoff that no one else could handle the king’s spirit, he still has to find a way to string his guardian along while still protecting his mother. In order to keep his family safe, Frederick has to figure out a way to dispatch Tarkoff without drawing attention from the king, yet the king being that close to him and that knowledgeable about his actions in East End makes that exceedingly difficult to do. But how should Frederick proceed now that he has someone like Tarkoff watching over him and expecting results from the king’s plan sooner rather than later? Is there a way he can please all parties involved while keeping Joanna safe?

Elsewhere on Witches of East End, Frederick and Freya celebrate a milestone birthday, while Ingrid grows closer to Dash, Tommy gets a surprise from Wendy, and Joanna faces one of her greatest fears.

Witches of East End airs Sundays at 9:00 on Lifetime. You can check out spoilers for the next three episodes here.

Do you think Frederick will go through with weakening his mother’s powers in order to please Tarkoff? Will Ingrid growing closer with Dash push her further away from Freya? Could the surprise Wendy gives Tommy have anything to do with her recent brush with mortality?