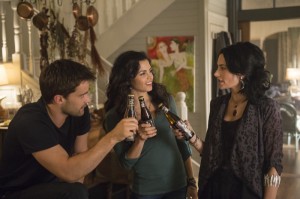 Having one life remaining, one would think that Wendy Beauchamp would take her foot off the gas pedal. She doesn’t have a way of gaining herself more lives yet and the ever-impulsive Beauchamp is one wrong move away from being done, but Wendy has never been someone to live in fear, to approach situations with caution. In a weird way, having one life has given her more motivation to be spontaneous and to pursue things that scare her. Though that currently include a committed relationship with a mortal, could Wendy be facing something more dangerous the longer that Tarkoff is in town and the closer the king comes to arriving in East End? And if she feels the noose tightening around her neck, will she say goodbye to Tommy in order to spare him the pain of losing her?

Listed below are the dates, titles, and descriptions of the next three episodes of Witches of East End.

Sunday, September 21st – “The Fall of the House of Beauchamp”
Joanna takes drastic measures after being devastated by Tarkoff’s actions; Dash’s secrets begin to spill out; Wendy and Joanna reconnect with their father.

How do you think Freya and Frederick will celebrate their birthday? Will Wendy continue her relationship with Tommy even though she only has one life remaining? Should Wendy and Joanna reconnect with the king or are they letting him too close considering their history together?