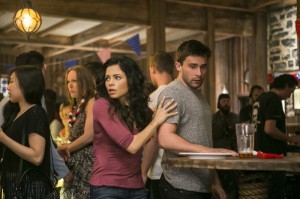 While Freya’s life was once in disarray, she believes that if she can find Killian, everything will turn back to normal. Well, as normal as life can be for someone who recently discovered that she’s a witch, but still, Freya’s life is lacking anything in the way of stability. She’s still figuring out how to control her powers, Ingrid’s decided to move out of the Beauchamp home, and Frederick made his return from Asgard claiming to be her twin and helping her with astral projection. It’s a lot to take in, yet if Killian were around and able to provide her with love and affection, things might be okay.

On the next episode of Witches of East End, Freya ends up tracking Killian down, only to find that he’s now married to Eva. First, Freya didn’t even know about the existence of an Eva and secondly, she thought that she and Killian left things in a way that they could pick their relationship right back up when they next saw one another. However, what Freya doesn’t realize is that Eva is the owl who attacked her during the spell with Frederick and that her intentions with Killian are far from pure, considering the manipulative way she’s handled her new husband since he washed up on the island she was staying at. Now Freya must figure out what Killian’s been up to since she last saw him and what exactly Eva’s motives in attaching herself to Killian are; if she doesn’t, it might be yet another lifetime before she finds him again and the circumstances are such that a relationship could be feasible.

Elsewhere on Witches of East End, Ingrid prepares to move out, while Dash seeks revenge after learning the identity of his blackmailer and Wendy and Joanna follow Frederick to suss out his motives for reconnecting with the family.

Do you think Eva has a magical hold over Killian and manipulated him into marrying her? What type of revenge will Dash seek over his blackmailer? Are Frederick’s motives for reconnecting with the family wholly good?