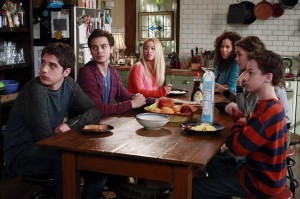 Stef and Mike might not always see eye to eye, but they’re at a fairly strong place in their relationship, one filled with the type of mutual respect that hasn’t always been present in their interactions. While Stef is busy emotionally and financially preparing for her sixth child, Mike has seemingly found his rock in Dani, someone who has gotten him healthier and provided support in the wake of his relapse. However, as much as Stef might want to believe that Mike is on the upswing, she can’t shake the idea that he had something to do with Ana’s disappearance, that the blackout he had is masking an ugly truth.

On tonight’s episode of The Fosters, Stef’s suspicions about what happened the night Ana disappeared linger and only get exacerbated when she learns that a Jane Doe that was recently brought in was killed by blunt force trauma. There’s no guarantee that this body belongs to Ana, not when there are innumerable ways for someone to die from blunt force trauma, but the signs are starting to point toward Stef’s greatest fear – that Mike got blackout drunk and beat Ana to death for everything that she put the family through. The biggest hurdle remaining might end up being the dental records, though there’s no guarantee of when Stef will be able to bring herself to look at them. Or if she’ll even be able to look at them at all.

Elsewhere on The Fosters, Emma second guesses her breakup with Jesus, which puts Mariana in an uncomfortable position, while Callie blames herself for what happened with Jude and Brandon confesses his past transgressions to someone from the band.

Do you think Mike is responsible for Ana’s disappearance? Should Jesus consider taking Emma back and breaking things off with Hayley? What will it take for Jude to come out of what he’s going through?