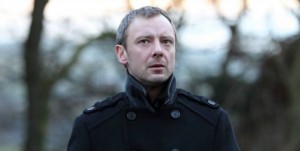 BBC America has released a behind the scenes featurette for upcoming drama Intruders, which mentions the series’ noir tinges and draws parallels between it and the work of Stephen King and Alfred Hitchcock.

Created by Glenn Morgan (The X-Files) and based on the novel by Michael Marshall Smith, Intruders tells the story of former LAPD officer Jack Whelan (John Simms), a man whose quiet, comfort life with wife Amy (Mira Sorvino) gets blown to bits when she goes missing. Along the way to finding her, he discovers that the world isn’t as he always perceived it. The series will have three distinct storylines that will coalesce at a latter point in the first season; in addition to Amy’s disappearance, Intruders chronicles an assassin (James Frain) embarks on a series of executions and a little girl (Millie Brown) running away from home and facing the dangerous world on her own.

The series premiere of Intruders is set to air Saturday, August 23rd at 10:00 on BBC America. You can check out a trailer for the series here, as well as additional teasers here.

Will you be watching Intruders? Did the behind the scenes featurette make you more likely to check the show out? Could this be the next BBC America series to generate serious buzz?