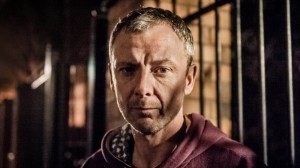 Adapted for television by Glen Morgan (Final Destination) from a novel by Michael Marshall Smith, Intruders tells the story of former LAPD cop Jack Whelan (Simm), whose quiet life with his wife Amy (Sorvino) gets interrupted when she goes missing. While his investigation goes on in the Pacific Northwest, sinister assassin Richard Shepherd embarks on a series of executions and distraught little girl Madison runs away from home, encountering a world of danger along the way. Soon enough, all three storylines interlink due to their connection to a secret society devoted to chasing immortality by seeking refuge in the bodies of others.

In addition to Simm and Sorvino, Intruders stars James Frain (The Tudors), Millie Brown (Once Upon a Time in Wonderland), and Tory Kittles (True Detective).

Intruders is set to premiere later this summer on BBC America. A premiere date should be announced in the coming weeks.

Will you be watching Intruders? Do you think the show can elegantly combine the three separate storylines and get the maximum impact out of its premise? How can a show with this type of premise keep itself afloat for multiple seasons?