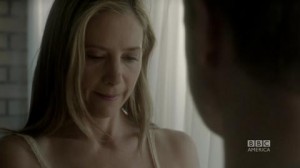 Jack Whelan thought that his life was smooth sailing after he officially retired from the LAPD. He didn’t have to live always looking over one shoulder, while he got to spend the quality time with his wife that he didn’t get while on the force. It was a nice change of pace for the former workaholic, but the quiet contentment he worked so hard to achieve was shattered when Amy went missing. The further Jack went down the rabbit hole that was his wife’s private life, the more he realized that he really didn’t know her at all.

On tonight’s episode of Intruders, Jack returns home from Seattle, still nursing bruises and scrapes from the fight he got into, and finds that Amy has returned on her own volition. As happy as he might want to be at seeing his beloved again, having pressed his nose against the glass case guarding her private life has caused him to become more cognizant of how she acts around him. He can no longer simply accept her presence as a good thing, nor can he allow himself to feel relieved at the knowledge that she’s physically alright; he now must try to read between the lines of how she conducts herself at home, from the music choices to the cryptic phrases she utters to the amount of warmth she shows him. Yet, it’s what he must do if he wants to figure out where she was while she was gone, what she meant by what she said in the cab, and what her absence could mean for his personal safety.

Elsewhere on Intruders, Madison becomes even more determined to get to Seattle and evade Richard’s vengeance.

Where do you think Amy was during the time that Jack couldn’t reach her? What type of collateral damage will Madison be forced to deal while trying to get to Seattle? How long will it be before she runs out of real estate and comes face to face with Richard?