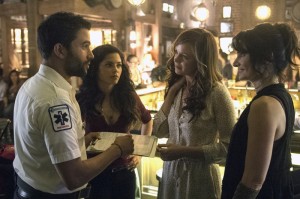 Despite the progress they made since they learned of their ancestry, Freya and Ingrid are still very much novices when it comes to witchcraft, both in terms of controlling what they can do and exploring what they’re able to do. It’s understandable that it’s taken them a minute to regroup upon learning that their entire lives have been based on lies and half-truths and they’re now left with the task of cramming years of knowledge and expertise into a condensed time frame; if they have any hope of helping Joanna recover from being poisoned and figuring out what happened with Killian, Ingrid and Freya will need to minimize their mistakes and continue building upon the knowledge they gained recently. But what happens when things get too intense for where they’re at in their understanding of themselves?

Listed below are the dates, titles, and descriptions of the first four episodes of Witches of East End season two.

Sunday, July 6th – “A Moveable Beast”
Season 2 begins with the Beauchamp witches fearing that a mystical presence crossed over to their world when the portal opened. Meanwhile, Victor helps Joanna recover from being poisoned; Ingrid develops a dangerous sleepwalking habit; and Freya sees visions of Killian in danger.

Sunday, July 13th – “The Son Also Rises”
Joanna is thrilled when Frederick returns, but Wendy remains suspicious of his behavior. Meanwhile, Killian discovers he has a lot in common with new love Eva; and Dash reluctantly deals with his blackmailer.

Sunday, July 20th – “The Old Man and the Key”
Ingrid prepares to move out; Freya tracks down Killian; Dash plots revenge when he discovers the identity of his blackmailer; Wendy and Joanna follow Frederick to discover his motives for reconnecting with the family.

Sunday, July 27th – “The Brothers Grimoire”
Wendy and T0mmy go through a disastrous series of meetings. Meanwhile, Frederick’s old friends from Asgard make an unwelcome visit to Fair Haven; and Dash and Killian receive their inheritance, which yields some interesting results.

What do you think is behind Ingrid’s sleepwalking? Could Frederick have crossed through the portal for completely innocent reasons/with no ulterior motive to speak of? How will Dash and Killian handle their new powers?