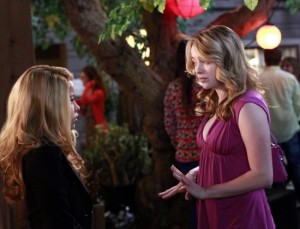 All Mariana Foster wants to do is belong. Although she does love her family and appreciate the unending support they’ve given her through everything with Ana, Mariana is an aspiring social butterfly and needs the type of interaction that she can’t get from Jesus, Callie, or Brandon. She needs to feel appreciated and to have a comfortable social group whose fabric she can be a part of, even if it means altering aspects of herself that she wouldn’t have thought to otherwise. But even with everything she’s given to the dance team in terms of effort and attention, in addition to kowtowing to their standard of beauty, could Mariana find herself on the outside looking in once again?

On the next episode of The Fosters, the Anchor Beach dance teams holds auditions for a new member, causing Mariana to question the true reason she was given a spot on the team. When she initially made the team, Mariana looked at it as an opportunity to expand her social circle, her appointment the result of her dance potential and overall enthusiasm; however, after overhearing accusations of affirmative action and never being able to break through the team’s inner circle, she’s doubted herself as a person and doubted her abilities on the dance floor. Already a sensitive person with issues of identity and abandonment weighing on her psyche, if Mariana learns that the real reason she was on the team was because of her race, she might be crushed beyond repair.

Elsewhere on The Fosters, Callie makes an important decision regarding her adoption hold-up, while Lena vies for the Principal’s job at Anchor Beach.

Do you think Mariana should continue pouring energy and effort into the dance team when they’re not making her feel welcome? Do you think Lena going after a more intensive job is the right thing to do, considering that she’ll have a new baby soon? How do you think Callie has been handling the hold-up in her adoption and the revelation that her birth father is Robert Quinn?