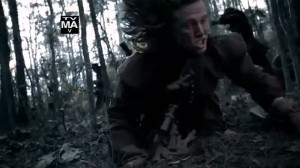 There’s no greater testament to the power of small town paranoia than the arrest of John Alden, favored son of Salem. Previously, he was held in high regard due to his father’s reputation and his own history in the armed forces, but once Tituba gave his name to Increase, all of that fell by the wayside. In its place? An unease about who this man is and what he was doing in his time away from Salem. The town is so riled up by the presence and conviction of Reverend Mather that they’re willing to go along with the idea of a trial, but can John manage to escape the clutches of a powerful hive mind and a determined witch hunter?

On the next episode of Salem, John’s trial begins after the vote from George broke the deadlock. Increase’s argument is that none of them know what John was doing while he was serving his time, leaving open the possibility that he dabbled in the dark arts and became a man his own father wouldn’t recognize, and considering the state of Salem, there might not be anything John could say or do to counteract any of this. Reverend Mather holds so much sway with his flock that anything he bellows from the pulpit will be deemed as fact, so even with his familial ties to one of Salem’s greats and a record of service that very few in town have, John is up against it presently and desperately needs a miracle if he is to survive these allegations.

Elsewhere on Salem, Mary informs Mercy about the status of the Grand Rite and Anne requests that Cotton examine her for the mark of the devil.

Will John be found guilty of witchcraft and sentenced to hang in the middle of town square? Is the trial of a dear friend of the town enough to make the citizens of Salem realize the cycle of lunacy that Increase has trapped them in? How will Mary keep John safe long enough for them to have a chance at running away together?