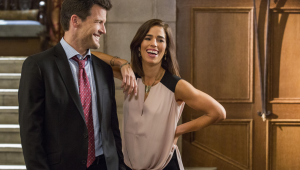 Suicide is an act that touches and greatly impacts more than just the person who commits it; it can reverberate throughout a community and put into perspective a lot of personal drama that seemed so insurmountable. Though Marisol wasn”t necessarily saddened to see Opal take her life, she still had to witness a woman putting a gun to her head and pulling the trigger, meaning that in addition to the disappointment at not learning Nick”s secret, she”s dealing with a host of issues that will impact her emotional state. It could have sent her running back to her hole, forcing her to protect herself above all else and delay her search for answers, but Marisol is nothing if not persistent and on the next episode of Devious Maids, she continues trying to find the truth about Nick.

Not as if that”ll be easy, though, especially now. Nick was already apprehensive casino online about saying anything to his wife, so the death of his close friend and confidant will further encase the truth in his memory bank and make it that much more difficult for Marisol to learn what happened all those years ago. If Opal would rather blow her brains out than let even the slightest of details slip, Nick”s secret must be something powerful and potentially devastating enough for her to not want to be around for the fallout, but just how involved could she have been in the first murder that Nicholas committed? And will Marisol be able to look at her husband the same way once she finds out what he did to get himself into this mess in the first place?

Elsewhere on Devious Maids, Zoila struggles with her feelings for Javier and Pablo, while Rosie recruits Lucinda and Didi to help rescue Kenneth from Reggie, Valentina tells the police what she knows about the robbery ring, and Carmen babysits Spence”s son.

Who do you think Nick killed and why is he so squeamish at the thought of coming clean to Marisol? Should Zoila give things another shot with Pablo? How much danger is Valentina in after coming clean to the police?