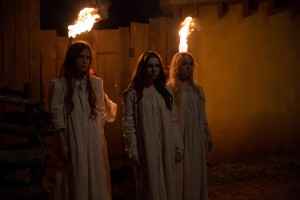 Before Increase arrived in Salem, Mary and the rest of the hive had no resistance in their journey toward the Grand Rite. They were able to manipulate any townsperson necessary to further their mission and their high-profile positions around town made certain that no one would suspect them as being the sources of the supernatural mischief. However, Increase, an experienced witch hunter who has dedicated his life to sniffing out magic, has put an inordinate amount of pressure on the hive; with the Grand Rite closing in, they still have to spill a certain amount of innocent blood, but now they’re going to have to do it under the nose of a dangerous threat.

On tonight’s episode of Salem, Increase has gotten even closer to uncovering the existence of the hive, as he lays out to Mary just how much he knows about the existence of witches in Salem. With the possibility of George blowing her cover in the air and the hive still against her power hungry ways, Mary has to find a way to silence her husband, continue the hive’s march toward the Grand Rite, and push Increase out of town for good. If the hive doesn’t band together, though, no plan Mary comes up with could help their cause, not when Increase has shown himself to be the biggest threat they’ve faced yet. Will Mary bring the rest of the hive to her side and use their magic to protect the cause they’ve been fighting for?

Do you think that the hive will be able to continue operating while Increase is in town? What will it take to force Increase out of town for good? Is Mercy the threat that Mary should be worried about right now?