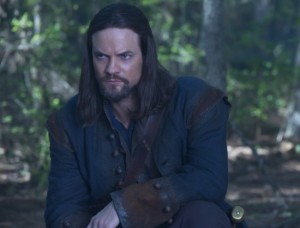 Years ago, Mary Wolcott thought that she and handsome John Alden would be together and that they could have a comfortable, quiet life full of love and devotion. It wouldn’t be the flashiest of times, but all that mattered was that they would’ve had one another. However, once John was sent to war by a jealous George Sibley, Mary vowed to get her revenge and worked her way into becoming Mary Sibley, First Lady of Salem – a powerful entity made all the more vicious by her membership in the hive and access to magic of all kinds. Her love of John is what continues pushing her to this day and on tonight’s episode of Salem, Mary gets a chance to express that love in a way that she didn’t think she would have.

That’s because John is being held on suspicion of witchcraft after Tituba named him in the House of Pain. While Mary doesn’t know about the betrayal of her friend and confidante, she quickly decides to rescue her former love and spare him from the jaws of the great beast that is Increase Mather. Partially driven by the guilt of taking a husband in his absence, Mary has become increasingly alone recently, the hive turning against her and Tituba betraying her confidence, so she needs any type of ally she can find in Salem. John may not know who she really is and the power that she has, but he’s someone that she needs in her life and if he gets taken away by the paranoia that’s sweeping the town, there’s no guarantee that Mary would be able to continue fighting for the cause.

Elsewhere on Salem, Cotton begins to turn the tide of public opinion against Increase, while Anne learns the truth about who her father is.

Will Mary be able to help John escape before his trial? If Mary finds out that Tituba gave John’s name to Increase, could this be the end of their friendship? How will Anne react to the truth about who her father is?