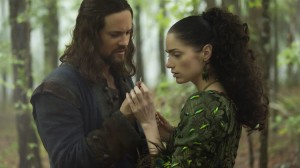 Mary Sibley once ruled Salem, albeit from a distance. While putting up the front of a concerned, doting wife whose only worry was the condition of her husband, Mary managed to roam the streets of Salem unimpeded by suspicion, with the hive’s plan for the Grand Rite being given free reign to unfurl. However, the presence of Increase, the burden of Mercy, and the betrayal of Tituba have all caused Mary to falter, forcing her to confront the idea that maybe the power she has wouldn’t be enough to get what she wanted. Except one thing – she still has a chance to save John and to leave Salem once and for all. She just has to be honest.

On the season finale of Salem, Mary confesses to John that she’s a witch, something she never thought she would admit to him. John is the one person in town she didn’t want to find out her secret, yet him knowing who and what she is might be the only way for her to spare his life. If he’ll allow her to work her magic, the type he metaphorically said she had when she visited him last, the two might still have a shot at the future they were denied all those years ago. With Increase breathing down her neck and the threat of execution looming in the distance, Mary’s magic is the secret weapon that could give her the life she always wanted, but will John still want anything to do with her when he finds out who she is? And even if he does, will he even want to fight his fate, considering what he did to the soldiers who burned the Indian village?

The season finale of Salem airs Sunday at 10:00 on WGN America. The series has already been renewed for a second season, which will premiere next spring.

Will John and Mary make it out of Salem safely? If the Grand Rite does occur, who in Salem is most vulnerable? Do you think Increase could stop the Grand Rite from occurring a second time?