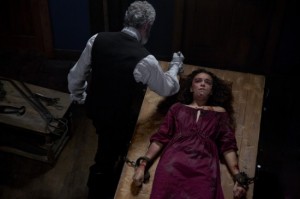 With the help of Mercy, Increase Mather got his biggest win since returning to Salem when he apprehended Tituba, someone with the most direct knowledge of the supernatural happenings in town. Mab could have pointed him in the right direction, but she was given too much of an opportunity to think her way out of her imprisonment, resulting in her suicide by black pill. While Increase was able to use Mab’s death to further his agenda by making a spectacle in the middle of town, he would have liked information to help him suss out the rest of the witches, so with Tituba, he’s going to take his time and leave her just alive enough to tell him what he wants to know.

On tonight’s episode of Salem, Increase gets right to the torturing of Tituba, hoping that he’ll be able to get enough information to properly bury Mary Sibley and seize control of the town for good. He knows that Mary’s a witch, but he doesn’t have the proof necessary to put her away, even in increasingly paranoid Salem, so what Tituba gives up under duress is even more important than it would’ve been otherwise. If she lets something slip, Mary could find herself at Increase’s mercy, the highest profile witch plucked out of the hive and put on display for the public to gawk at; however, Tituba is nothing if not loyal to Mary, so her resolve might just be high enough to withstand Increase’s torture long enough for Mary to rescue her.

Elsewhere on Salem, Anne finds herself in danger when she puts on her father’s mask, forcing her parents to turn to John for help, while Cotton continues struggling with life in Salem under Increase’s shadow and without Gloriana.

How much information do you think Tituba will divulge while being tortured? Should Mary get rid of Mercy now after seeing how much the girl’s power has grown? What will Anne see after putting on her father’s mask and how will that impact her opinion of him going forward?