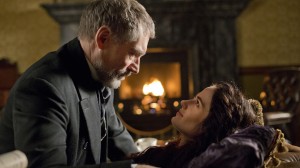 Prior to her night with Dorian, Vanessa had been especially careful about controlling the darkness that resided within, as she knew what happened when it was allowed free rein. She didn’t want to have a repeat of the end of her friendship with Mina and the subsequent trip to the asylum, so she held tightly to that darkness to make sure it never bubbled its way to the surface again. However, being intimate with Dorian caused her to let her inhibitions go and, with that, the darkness was allowed to dark over once again, providing a distraction in Malcolm’s quest to bring his daughter home.

On tonight’s episode of Penny Dreadful, Malcolm, Ethan, and Victor must deal with Vanessa’s possession, figuring out what exactly is inside her and the best course of action to expel the demon once and for all. Not only has Vanessa been a key figure in Malcolm’s journey, the two have grown personally close, so he has extra motivation to nurse her back to health. But with her possession coming during the time he needed to be going after Mina, who he caught a glimpse of on the plague ship before having to flee, Malcolm has to make a choice between saving his friend and saving his daughter, which is all the more interesting since Vanessa is his best weapon against the being that took Mina to begin with. If Malcolm decides to use Vanessa’s condition and connection to the spirit world in order to locate his daughter, though, will she ever forgive him, should she come out of her possession with most of her mental faculties still in tact?

What will it take for the demon that resides in Vanessa to be driven out? Is Malcolm wrong for using Vanessa’s condition to help him find Mina? Even if Vanessa’s demon is vanquished, will this be the straw that breaks her relationship with Malcolm and commitment to rescuing her former friend?