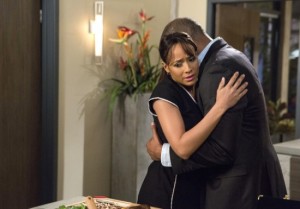 Rosie’s naivete has been both a blessing and a curse to her professional life. On one hand, she’s able to separate herself from the nefarious goings-on that she’s experienced and not allow it to harden her as a person, something that’s become more impressive with each passing episode; on the other, though, her ability to see the best in people allows things to slip by her in plain sight and less than savory characters to take advantage of her trusting nature. While one wouldn’t want Rosie to lose what makes her such a special person, you have to wonder whether becoming more streetwise and less immediately trusting could do her some good.

On tonight’s episode of Devious Maids, Rosie pledges to help Kenneth after he takes a mysterious fall. A less trusting person would immediately hone in on the fact that Reggie has been behind the ousting of Lucinda and Didi from the Miller home, which makes him a suspicious person and someone who could have something to do with the fall; a less trusting person would question why a successful, grown professional would even be staying at his father’s house, since Didi already called him on the lie that his “apartment was being painted.” But Rosie wouldn’t be Rosie if she didn’t go into situations like this with heart and mind wide open, so due to her penchant for optimism and the company that Reggie’s given her after everything that happened with Spence, she’s not yet at the point of wondering what’s going on with this man that she likes. At some point, though, she’s going to have to open her eyes and realize that the Miller household is about to implode.

Elsewhere on Devious Maids, Marisol is shocked by a secret Nicholas reveals in a drug-induced haze, while Zoila forces Genevieve to face her mother (and her past), Valentina asks Remi to help an ailing Ethan, and Spence leans on Carmen when he receives bad news.

What do you think Reggie’s end game is after getting rid of Lucinda and Didi? Is Nicholas’ secret going to be about the first murder he committed? Will Remi help Ethan or is he going to let the pool boy bleed to death?