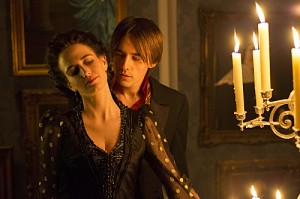 Vanessa’s connection with the spirit world was thought to be an asset in Malcolm’s quest to find Mina, especially with Mina showing herself to her former friend before being pulled away by her captor. However, once Malcolm learned about the Devil chasing Vanessa, the darkness inside of her causing a series of visions to be proven incorrect, her status was much less prized, to the point where no one knew whether they could trust her to give them accurate information regarding Mina’s whereabouts. Still, Malcolm is as desperate as ever to locate his daughter and Vanessa might be his strongest link to her, despite the fact that she’s acting like a magnet for dark supernatural forces.

On tonight’s episode of Penny Dreadful, Vanessa’s latest vision leads Malcolm and company to a plague ship, but before the men can find the location, Sembene confronts Malcolm about the plan once they locate Mina. Even if Vanessa is being pointed in the right direction and they manage to defeat Mina’s captor, that’s only half the battle; there’s the whole matter of what physical, emotional, and psychological damage was done to Mina during her time in captivity and the seemingly impossible task of reassimilating her back into society. What if Mina isn’t the same girl that Malcolm once knew? What if she can never become that girl again due to what she’s been through?

Elsewhere on Penny Dreadful, Van Helsing reveals more about the creature that abducted Mina, while Vanessa’s night with Dorian unlocks something dark within her.

What would happen if Malcolm manages to rescue Mina, only to find out that she’s irreparably damaged from her time with her captor? How will Malcolm’s team prepare to face down the creature that abducted Mina? Will the darkness that threatens to overtake Vanessa impact the mission to save Mina?