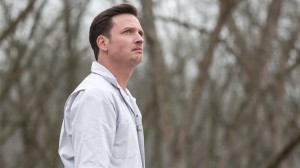 All Daniel Holden wanted was the opportunity to live his life and catch up on the experiences he missed while locked away for a crime he didn’t commit. Half his life was thrown away over small town hysteria and the need to assign blame when a tragedy erupts, but that’s not enough for those who lived in town when Hanna was found dead. They believe that, despite what the DNA evidence says, Daniel is guilty and they’re determined to make him feel like he never left a prison cell.

On tonight’s episode of Rectify, Daniel has ended up in the hospital after the beating and finds himself in a coma, putting even more pressure on the rest of the Holden family than his release and the subsequent media coverage already did. The Holdens had some semblance of normalcy while Daniel was behind bars, but once he returned home, their entire dynamic was shaken and the extremes of the family (Ted Jr. and Amantha) grew that much further apart. But will Daniel’s precarious medical condition end up bringing the Holdens closer together, as they realize just how much of an impact Daniel has on their lives? Or will the fraught emotions that come with situations like this tear them even further apart?

Elsewhere on Rectify, Ted Jr. tries to keep a hurtful secret from Tawney, while Sheriff Daggett’s investigation into the beating finds difficulty in getting off the ground.

The second season of Rectify premieres tonight at 9:00 on SundanceTV. You can check out a trailer for the season here, as well as a behind the scenes look at the acclaimed drama here.

How long do you think Daniel will be in the hospital after the beating? What type of impact will the beating have on the Holden family? Will the town law enforcement give their all in looking into the beating or is Daniel’s notoriety and presumed guilt going to hamper any type of investigation?